ECP mandate: under study and on hold 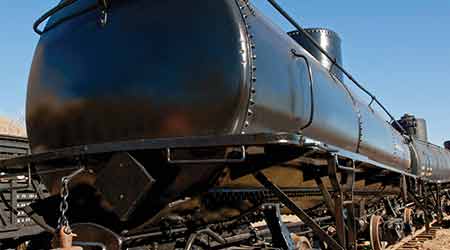 "The U.S. Department of Transportation has until Dec. 4, 2017, to publish a "determination" that the ECP mandate for new tank cars either is justified or should be repealed.

It’ll be awhile yet before the rail industry knows when, or if, electronically controlled pneumatic brake systems (ECP) will need to be installed on U.S. tank cars.

A call to mandate ECP installations came in May 2015, when the U.S. Department of Transportation (USDOT) unveiled a rule governing the transportation of flammable liquids by rail, primarily crude and ethanol. Developed by the Pipeline and Hazardous Materials Safety Administration and Federal Railroad Administration in coordination with Canada, the rule focused on safety improvements designed to prevent crude-by-rail accidents, mitigate consequences if an accident occurs and support emergency-response efforts.

The rule stipulated that new tank cars built after Oct. 1, 2015, meet design and performance requirements for a new USDOT-specified class of tank cars. Crude unit trains of 70 or more cars operating faster than 30 mph are to feature an ECP brake system by Jan. 1, 2021.

ECP brakes issue electronic signals to simultaneously apply and release brakes throughout the length of a train instead of each car applying brakes individually. They offer the potential to shorten stopping distances, improve train handling, and reduce brake shoe and wheel wear.

In June 2015, the Association of American Railroads (AAR) filed an administrative appeal with USDOT challenging the tank-car rule. The challenge included a call to remove the ECP requirement, characterizing the braking system as an “unproven technology” that wouldn’t prevent derailments or provide “meaningful overall safety benefits.”

In November 2015, USDOT denied the appeal; the AAR then launched a legal challenge to the rule itself in the U.S. Court of Appeals for the District of Columbia Circuit.

Just a couple weeks later, President Obama signed into law the Fixing America’s Surface Transportation (FAST) Act, which rendered most of AAR’s challenges moot, including tank-car rule provisions requiring increased thermal blanket protection for tank cars; restrictions on the use of older DOT-111 tank cars moving flammable liquids, regardless of how many of the cars are in the train; and the requirement for top fittings protection on car retrofits.

The ECP requirement is still on the books, but per FAST, the USDOT now must reconsider the mandate. The Government Accountability Office and the National Academy of Sciences must conduct an independent “evidence-based approach” to evaluate ECP brake systems, pilot program data, and the USDOT’s research and analysis on the brakes’ costs and benefits. USDOT has until Dec. 4, 2017, to publish a “determination” that the ECP mandate either is justified or should be repealed.

As a result, the AAR, American Short Line and Regional Railroad Association and Union Pacific Railroad on March 1 filed a motion asking the D.C. appellate court to hold their November 2015 petitions for review in abeyance.

“Since Congress ... is requiring the DOT to conduct additional studies on all aspects of ECP braking over the next 18 months, the proper procedure in this circumstance is for the court to put the matter on pause until a new determination is made on the ECP brake component of the tank-car rule,” says AAR spokesman Ed Greenberg.

The court hadn’t issued a ruling as the April 2016 print edition of Progressive Railroading went to press. In the meantime, interested parties will have to wait until December 2017 to learn the mandate’s fate.