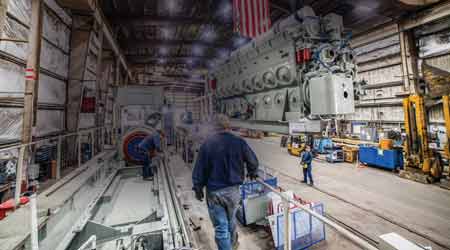 Freight carloads were down for the second consecutive year in 2016, primarily due to a sluggish manufacturing economy and turmoil in the energy markets. Intermodal volumes weren’t great, either.

Freight locomotive manufacturers certainly felt the impact of another slow year, and some believe the same challenges they faced in 2016 will continue in 2017.

“However, there are positive signs that locomotives are returning to work, and opportunities are on the horizon,” Haycraft added.

One such opportunity: Locomotive providers are using this manufacturing downtime to increase rebuild activity, boost their parts and service business, and, in some cases, expand their global footprint.

Progressive Railroading recently checked in with representatives from five locomotive manufacturers to discuss the marketplace, technology and other developments. What follows are their responses, gleaned from phone and email interviews.

Officials at NRE, which provides new and remanufactured locomotives, have noted a steady stream of overhaul and repair work this past year, Zerafa said.

To help make up for the decrease in new locomotive business, NRE focused on strengthening its in-house services, boosting its component rebuilding and spare parts businesses, and acquiring HK Engine Components LLC (HKEC), which builds and remanufactures EMD-style 645, 710 and 567 engine power assemblies for the railroad and marine markets. Completed last year, the HKEC deal enabled NRE to expand its engine solution options for customers around the globe.

“With the intensified competition, we want to offer more choices for railroads,” Zerafa said.

Additionally, the company is pilot-programming its electronically controlled actuator with Class I and short-line customers. The product replaces the traditional hydraulic governor and is an entry point for railroads following a capital improvement schedule for replacing existing equipment.

For Progress Rail, which manufactures Electro-Motive Diesel (EMD) branded locomotives, deliveries last year included a portion of Tier 4 production unit order for a North American customer. In February, the company unveiled the EMD24B [RE]power locomotive, which previously was known as the PR24B, Progress Rail’s Haycraft said. The unit is a GP-style locomotive powered by a Cat® 3512C HD engine and is designed with flexibility to allow customers to choose options without extensive engineering. On Feb. 22, Progress Rail announced it had successfully completed initial emissions testing of the EMD24B and had begun the process of certifying the locomotive per the U.S. Environmental Protection Agency’s Tier 4 emissions standards. The unit will start the California Air Resources Board’s 3,000-hour in-service verification testing, first with Pacific Harbor Line Inc.

“As a company, we are taking advantage of this time to streamline our operations and engineering, and further enhance our technology strategy,” he said. “Improved life-cycle cost and improved velocity for the railroads continue to drive innovation.”

Brookville spent much of 2016 expanding its parts and service support networks, and customers showed an increasing interest in the company’s customized diesel-hydraulic yard switchers for mining and other heavy-haul tasks, Mohney noted. Last year was the first full year of service for the BL05 locomotive at the Puget Sound Naval Shipyard & Intermediate Maintenance Facility in Bremerton, Wash., and Brookville is the only U.S.-based manufacturer to build this locomotive type, Mohney said. The company expects more inquiries in 2017 from shipyards, cement factories and other industrial businesses that require short, heavy-haul applications.

Brookville also expects its Tier-4 BL12CG CoGeneration™ locomotives, which are designed to reduce emissions, to get more attention this year.

“There are a lot of advancements in available technology that railroads will be looking at to advance their fleets and conserve the environment,” Mohney said. “I don’t see that changing anytime soon.”

Modernized locomotives also can be equipped with digital solutions such as Locotrol DP, which can reduce stopping time by more than 20 percent, and Trip Optimizer, which can generate 10 percent fuel savings and has helped railroads save more than 100 million gallons of diesel, according to the company.

“Digital [solutions] will remain a priority, as we help customers better optimize their assets to achieve greater outcomes,” Singh said. “In fact, we’re seeing digital become a key leapfrog factor within the rail sector across all levels.”

The company also delivered “hundreds of locomotives globally and celebrated key milestones regarding our Indian Railways deal,” including the groundbreaking for the manufacturing and services facilities, Singh said, referring to a 2015 agreement with India’s Ministry of Railways to develop and supply 1,000 diesel units.

“Furthering our global footprint, we successfully delivered locomotives to key markets, including South Africa, Angola, Pakistan and Indonesia,” he said.

Railserve: Turning over a new LEAF

Last year, Railserve rolled out the first Tier 4-compliant Dual Railserve LEAF locomotive. Two basic LEAF models now are available: the original single-engine unit, and the two-engine Dual LEAF. Both boast the same Cummins Genset the manufacturer has always used, but now in a Tier-4 compliant configuration, according to the company.

“What was already a very clean machine has become even more environmentally friendly,” said TJ Mahoney, Railserve’s LEAF program manager, in an email.

Compared with conventional locomotives, both LEAF models now reduce nitrogen oxide emissions by 92 percent and particulate matter by 99 percent, with fuel consumption rates that are 45 percent to 65 percent lower than conventional units, Mahoney said. In a typical operation, where fuel use is reduced by 50 gallons of diesel per day, the LEAF cuts greenhouse gases by 400,000 pounds per year, he added. The Railserve LEAF employs Observe/Analyze/Respond™ (OAR) technology developed by Alternative Motive Power Systems (AMPS). OAR allows multiple users to track a wide range of operating data from remote locations.

Data from the AMPS Locomotive Control Unit onboard each Railserve LEAF is processed by OAR, and then transmitted via Wi-Fi or cellular system to a web-based dashboard for locomotive status and performance monitoring by on-site plant managers or operations personnel at remote locations, according to the company.