New power sales may be down, but locomotive repair shops have been busy 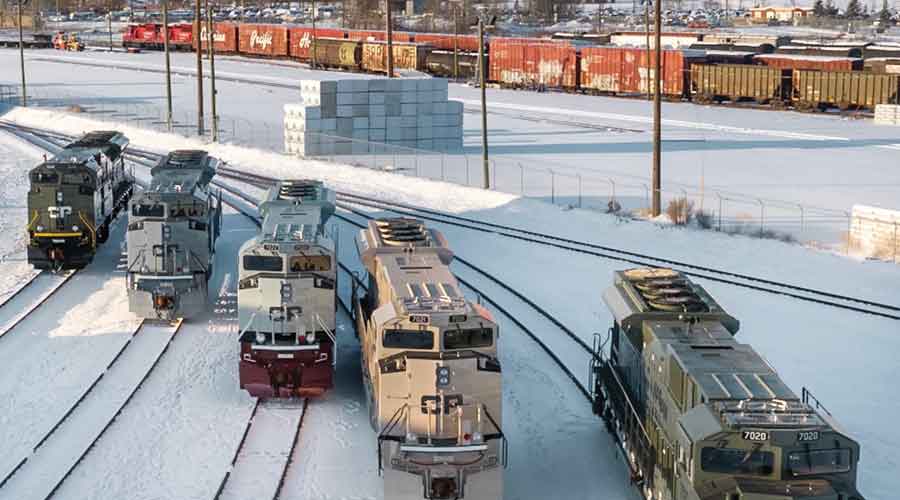 Railroads haven’t been buying many big-ticket assets, including locomotives, the past couple years. But the power units they do have in revenue service still need to be serviced, repaired and overhauled. And remanufacturing shops have been pretty busy of late, if recent calls and emails to shop officials are any indication.

The work they’ve been doing ranges from simple refurbishments to complete overhauls as they aim to help customers boost locomotive performance and efficiency.

Moreover, the implementation of precision scheduled railroading (PSR) at a number of railroads has created a surplus of locomotives, he says, adding that as many as 4,000 have been stored.

Overhaul work ranges from refurbishing the diesel motor to “rotating equipment” such as traction motors, blowers and other components, which can add six to 10 years to the life of the locomotive, Edwards says.

Similarly, shops are converting a SD70 to a SD70ACC featuring new trucks and electrical equipment. And models such as the SD75 and SD60 can be equipped with EM2000, Progress Rail’s latest control system.

For Wabtec Corp., modernization and upgrade work also is providing a significant opportunity, given the locomotive builder’s more than 23,000 units in service worldwide, says Sameer Gaur, the company’s general manager of product management, freight global services. Many units are approaching the 15- to 25-year-old age range, he adds.

Updates can include a control system upgrade — including the complete conversion of an old DC traction motor unit to an AC motor locomotive equipped with state-of-the-art digital technology.

“Our goal is to not only extend the life of the locomotive, but to make it more productive, more reliable and [more] fuel efficient, as well,” says Gaur.

For example, Wabtec’s FDL Advantage program provides an upgrade of the FDL engine, which has been used in many different models of locomotives for years, Gaur says. In addition to mechanical changes, there is also a complete control system replacement, he adds.

The company’s Modular Control Architecture - Fleet Migration (MCA-FM) program provides a next-generation system designed to be “incorporated with all of our locomotives,” Gaur says. MCA-FM replaces all old electrical cabinets with new panels and is compatible with GoLINC, Wabtec’s onboard computing platform. It also provides increased reliability and diagnostic capabilities.

“Wabtec’s modernizations included a range of models, such as U-Series, C-Series, Dash 8, Dash 9 and AC4400,” Gaur says. “Some are being converted to AC power, replacing DC as well as cab replacement and other work, and are coming from most of the Class I railroads and some regionals.”

From repower work to parts sales

Other locomotive shops also are getting a lot of rebuild work done these days. Since 2017, Brookville Equipment Corp. has completed a rebuild of eight GP35 locomotives for MTA Metro-North Railroad, said marketing specialist Adam Mohney in an email.

Brookville officials see some demand for rebuild or upgrade programs, but demand for new Tier 4 locomotives is gaining momentum, he said.

Meanwhile, The LEAF manufacturing division of RailServe Inc. has more than 70 of its Gen-Set locomotives in service, says Larry Lewczyk, LEAF division plant manager. And some of the units are reaching the upgrade or rebuild age.

As part of the upgrades, all electrical components are replaced with a much more robust system.

“We can also do upgrades to Tier 3 in the field allowing the locomotive to be returned to service [quickly],” says Lewczyk.

Offshore business also has been “significant” on the rebuild/upgrade fronts, Lewczyk says. The company now can supply a kit and technical assistance so the work can be done without returning the locomotive to the LEAF plant.

Another way to measure market health is locomotive parts sales activity. At PowerRail Inc., officials have noted an increase in parts sales during the past two years, as well as an increase in parts remanufacturing, said President and Chief Executive Officer Paul Foster in an email. Some of the increase could be due to railroads that have implemented PSR and are now bringing those locomotives in for maintenance and overhauls, he said.