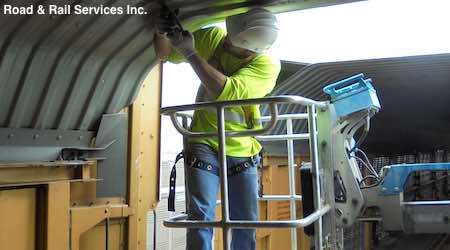 Execs at Road and Rail Services Inc. say that 2015 was a "very good year" for the company's repair unit.

When the U.S. Department of Transportation last year issued a new set of standards for tank cars transporting flammable liquids, rail-car repair companies began prepping for what they expected to be an onslaught of retrofitting work. Unveiled in May 2015, the regulations stipulated that DOT-111 tank cars needed to be updated to meet newer safety requirements.

In June 2015, Union Tank Car Co. announced plans to build a facility in Ohio dedicated to remanufacturing work on DOT-111 and CPC-1232 cars. The company opened that plant in March. And in 2014, The Greenbrier Cos. Inc. and the Watco Cos. LLC formed a joint venture known as GBW Railcar Services LLC in part to handle anticipated retrofits.

So far, however, the demand for retrofits hasn't quite matched earlier projections. The high costs associated with updating the older tank cars and plummeting oil prices have dampened demand, but repair company execs still expect 2016 to be a busy year thanks to steady calls for requalifications and maintenance work in other segments, such as autoracks.

"We're seeing very slow trickles of DOT-111 retrofits," says Michael Obertop, GBW's senior vice president of sales and marketing. "We are doing them and we have been doing them throughout the year, but there’s just not a huge demand."

GBW operates 31 repair shops throughout the United States and two in Canada. The shops perform a range of work, including mechanical services, certifications, cleaning and coating.

The cost of retrofitting could be as much as 50 percent of the price of a new rail car, Obertop estimates. As a result, some car owners may choose to scrap their DOT-111 tank cars entirely.

"I don't think you’re going to see many [DOT-111] cars retrofitted," says Jeff Schieszler, director of customer service at Rescar Inc., which performs repairs on a variety of cars at nearly 100 service locations in the United States and Canada. "Some of them are going to find a home outside the flammable liquid industry, and some are just going to be scrapped."

That may not be the case for CPC-1232 tank cars, however. Those cars, which have added safety features and other “bells and whistles,” could be good candidates for retrofitting because of their younger age compared with DOT-111s, says GBW's Obertop.

"It wouldn't make sense to scrap those cars because they still have a lot of life left in them," he says, noting that CPC-1232s have only been around since 2011.

At the same time, the lack of retrofitting work has provided repair shops a little "breathing room," says Rescar's Schieszler.

"There wasn't enough capacity prior," he says. "I have no concerns over the next couple of years about Rescar finding more than enough work to keep its shops completely jammed as they currently are now."

And to be sure, there continues to be strong demand for tank-car requalifications. Every five to 10 years, tank cars need to be reinspected. 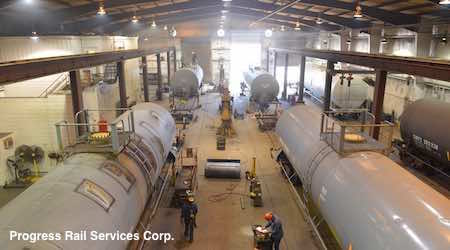 Due to the ethanol boom in 2006, car owners purchased many more tank cars than usual. So, in 2016 and beyond, they’ll be looking to get those cars requalified, Obertop says.

"That will keep our shops very, very busy," he says.

Rescar also is "still in the middle of the qualification bubble," Schieszler adds. "There's high demand for tank-car qualifications, which is good work."

Meanwhile, falling crude oil prices have led owners to put a significant portion of their tank-car fleets in storage. By the end of February, as many as 20,000 of the cars — equivalent to about one-third of the North American fleet used for carrying oil — were temporarily parked, according to a Feb. 28 Wall Street Journal report.

When cars are put into storage, maintenance is often deferred, Schieszler says, noting that owners typically opt for basic cleaning work in the interim.

"That's taxing because all it does is hit your cleaning departments," he says. "There's no meat left to feed the rest of the beast."

Lagging freight-rail traffic in general led to an overall average year for the company's repair business in 2015, he says.

"We started seeing the decline in railroad traffic in the first quarter of last year, primarily in the coal segment, and that bled over into the oil segment," Haycraft adds.

And like the folks at GBW and Rescar, Progress Rail isn't observing a significant call for tank car retrofits.

But in 2016, box cars, covered hoppers and intermodal cars likely will be some of the drivers of Progress Rail’s repair business. Automobile racks, which need to be certified to meet specifications for individual carmakers, present another opportunity.

"With the automobile industry doing as well as it is … auto racks are pretty good business, too," Haycraft says.

Road and Rail Services Inc., which performs mechanical repairs at more than 30 locations in 15 states, also anticipates higher demand for repair work on autoracks due to an increase in vehicle production. The company, which performs light-maintenance work and full-service repairs, uses a dedicated inspection process that now provides car condition data on the autorack fleet, said Vice President of Customer Service Greg Miller via email.

"This has allowed rack owners to determine the number of rail cars requiring major overhaul or upgrades due to actual rail-car condition," he said.

The increase in automotive production follows a slow period from 2008 to 2010, when railroads downsized their autorack fleet. Now that the market has recovered, the existing fleet is stretched to capacity, Miller added.

Overall, 2015 was a "very good year" for Road and Rail’s repair unit, Miller said. With no brick-and-mortar shops, the company focuses on expediting repairs in the field, which means that cars often can re-enter service within 24 hours.

"With some uneasiness in the market, railroads and leasing companies cut back spending on heavy repair and upgrades in the repair shops at the end of last year, and into the first and second quarters of 2016," Miller said.

This placed a greater emphasis on field repairs and allowed the company to open additional mobile repair operations.

"From a revenue perspective, we’re going to see an incremental gain" in the company's current fiscal year, he says, adding that 2015 was a "good year" overall.

For the remainder of this year, freight-car repair companies will continue focusing on the stream of maintenance work before them.

"We haven't had any problems finding work," says Rescar's Schieszler. "It's just that it's a little more difficult finding the right mix of work."