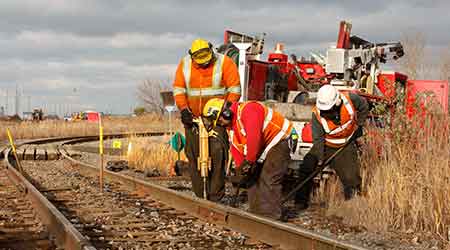 CN and the United Steelworkers (USW) Local 2004 yesterday announced they reached a new tentative agreement. The union represents 3,000 of the Class I's track and bridge personnel in Canada.

Late last week, CN announced it reached a new tentative pact with Unifor Local 100, which represents 2,100 locomotive and freight-car mechanics, electricians and apprentices in Canada. Both the current USW and Unifor contracts with CN expire at year's end.

"We are pleased to conclude yet another negotiation. CN is committed to working together with our railroaders and their representatives to address workplace issues in a mutually beneficial manner," said CN President and Chief Executive Officer JJ Ruest in a press release.

No details of the tentative USW Local 2004 agreement were released pending ratification.

"We are pleased that we were able to reach an agreement with the CN that recognizes the hard work and commitment of our members," said USW Local 2004 President Jean-Francois Migneault.