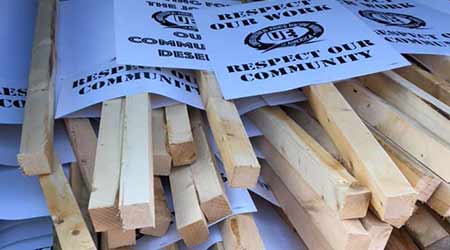 United Electrical, Radio and Machine Workers of America (UE) announced this morning they've gone on strike at the former GE Transportation locomotive plant in Erie, Pennsylvania, less than a day after the plant became part of Wabtec Corp.

The strike involves UE Locals 506 and 618, which represent 1,700 workers at the Wabtec facility, according to a UE press release.

Yesterday, after Wabtec announced its merger with GE Transportation was completed, company and union officials returned to the negotiating table in an effort to reach an agreement. Despite working until the early hours of this morning, company and UE officials were unable to reach an "acceptable short-term agreement that preserves wages, benefits and working conditions negotiated with GE over the past eight decades," UE officials said.

"We are extremely disappointed that the company could not see its way to agree to continue the terms and conditions that we have worked under for decades," said UE Local 506 President Scott Slawson.

Wabtec's terms and conditions include the introduction of mandatory overtime and arbitrary schedules, wage reductions of up to 38 percent for recalled and newly hired workers and the right to use temporary workers for up to 20 percent of the work at the plant, according to the UE.