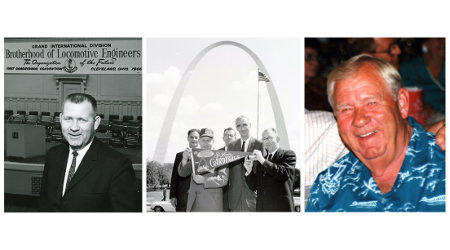 Watson served as international vice president for the labor organization from 1979 through 1993, when it was known as the Brotherhood of Locomotive Engineers (BLE). The BLE merged with the International Brotherhood of Teamsters and became the BLET in January 2004.

Watson began his railroad career with the Terminal Railroad Association of St. Louis in 1950. He joined the BLE Division 48 in St. Louis after being promoted to locomotive engineer in 1953.

Over the years, he served the union in several ways, including as chairman of the Southwestern Convention Meeting and delegate to the 1962 BLE Grand International Convention.

Before his rail career, Watson served in the U.S. Navy.

Watson is survived by his wife, Patricia, as well as children and grandchildren.

"Ed Watson was a tremendous asset to our Brotherhood and he will be missed by all who know him," said BLET National President Dennis Pierce.