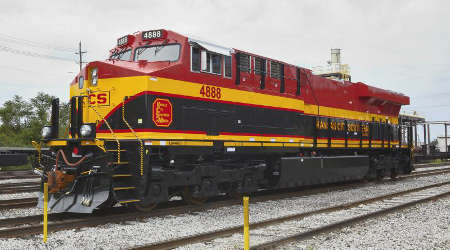 Kansas City Southern will acquire 50 new locomotives from GE Transportation for the railroad's subsidiaries in the United States and Mexico, the companies announced today.

The first units are expected to be delivered in early 2019. The agreement includes digital solutions to help improve operations and fuel efficiency, according to a jointly issued press release.

"This purchase will help us continue the modernization of our locomotive fleet and position KCS for future expanded volumes," said KCS Executive Vice President and Chief Operating Officer Jeffrey Songer.

"This agreement will expand our relationship with KCS, drive operational efficiency across their system, and further meet the needs of their future growth," said GE Transportation President and Chief Executive Officer Rafael Santana. "Our leading Tier 4 locomotives will give KCS the productivity and reliability needed to move and grow with its customers."

GE will begin producing the locomotives this year at its plant in Fort Worth, Texas.