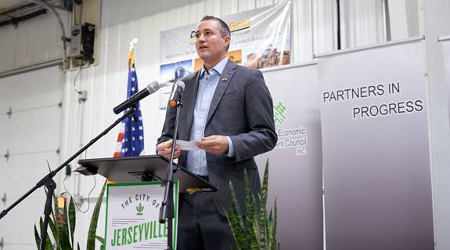 Kansas City Southern will serve a new multimillion-dollar logistics park that will be developed in Jerseyville, Illinois.

Plans for the Mid-American International Gateway were unveiled yesterday in Jerseyville, where the 1,400-acre park site will be located east of the existing KCS rail line that passes through the community near Crystal Lake Road.

The project is the result of a collaboration between Atlanta-based Stonemont Financial Group and the Jerseyville Economic Development Council. KCS played a key role in forging the ongoing collaboration, according to a council-issued press release.

Stonemont officials anticipate construction on the park could begin as early as this year, with deliveries rolling through about 12 months later. The firm also estimates that investments in the project could total up to $500 million.

"We anticipate the project will support new, long-term jobs that could help keep young people working here in in our community until they retire," said Jerseyville Mayor William Russell. "We will serve 11 states out of this site, essentially anywhere within reach with one-day trucking. The possibilities for business and job growth are significant."