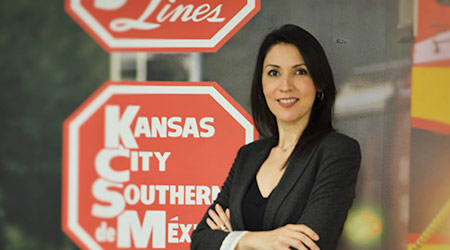 Nominator’s quote: “As one of KCS’ and the rail industry’s leading strategists for Mexican energy reform, Sara is on the cutting edge of developing policies and strategies for this new rail opportunity. As an exemplary executive and a trendsetter for Mexican leadership in the KCS organization, Sara leads a team of professionals located in the United States and Mexico, as KCS moves aggressively into Mexico’s energy sector. And as a female Mexican executive leading a cross-border team, Sara is an inspiration to young female leaders in the United States and Mexico.”
— David Eaton, KCS

Why did you pursue a career in the rail industry?
I joined KCS in 2005 when the company completed its acquisition of the railroad that became Kansas City Southern de Mexico (KCSM). I was impressed with how quickly KCSM evolved into a railroad that made a positive impact in Mexico.

I felt myself growing over the years into someone for whom the rail industry wasn’t just a job but an opportunity to work in a business constantly reinventing itself. Working in such a diverse and versatile field has kept me both busy and inspired. It’s always interesting at KCS.

Describe your education after high school.
In 2004, I received a Bachelor of Science degree in mechanical engineering and administration from the Instituto Tecnológico y de Estudios Superiores de Monterrey (ITESM), graduating with honors. At that time, I had the privilege of receiving the Excellence Award for being the highest-ranking student in my undergraduate class.

In 2013, I attained a Master of Business Administration degree in global business and strategy from EGADE Business School and the Belk College of Business at the University of North Carolina-Charlotte. Graduating with honors, I had the distinction of being inducted into the International Honor Society Beta Gamma Sigma.

How are you making a difference in the rail industry?
Energy reform is a historic opening of an entire sector of the Mexican economy that ended the state-owned energy monopolies. Consequently, transportation of refined fuels and LPGs from the United States to Mexico via rail is a recent industry development.

Being part of KCS’ achievements in making inroads into the Mexico energy reform transportation market has been a wonderful opportunity. I’ve developed KCS pricing strategies that maximize our rail business, allowing us to remain profitable and sustain growth while increasing our market share. By understanding the market and sizing our business opportunities, I am able to forecast appropriately, so we can plan resources accordingly to meet the market’s needs.

Based on the expertise I’ve acquired, I’ve had the opportunity to be at the forefront of discussions at major conferences about rail strategies regarding Mexico energy reform. I’m humbled yet grateful that I’ve been able to contribute to the industry’s knowledge of one of the fastest-growing rail transportation opportunities.

What is an interesting, unusual or little known fact about you?
Two things involving my family’s legacy come to mind. My family owns a business, established by my grandfather in the 1950s, for harvesting, processing and selling pecans. Also, my great-grandfather was a railroader, and I seem to be the only family member who followed in his footsteps.

What was your very first job?
Not counting working at the family pecan business, my first job was as an intern at CEMEX in the mechanical engineering projects division.

What is your philosophy toward life and/or your career?
My philosophy is to never stop learning and to constantly seek to improve myself, my actions, outcomes and next steps.

I work with passion — whether it be on things I do professionally or personally. No matter how hard I work, I always think about how I could do better.  Performing your work with integrity while always seeking ways to improve makes us better people in every dimension of our lives.

What is your advice to new railroaders who want to advance their careers?
Do not hesitate to take on new challenges. Jump in, volunteer, get involved in activities, projects or new responsibilities beyond your current role or area of expertise. Taking on new challenges will force one to learn different elements and areas of the railroad industry.

What do you think will be the biggest trend to affect railroading over the next decade?
Digitalization and automation will play leading roles in the rail industry’s efforts to streamline operations and improve service. Whether it be by improving asset utilization, security or consistency or by reducing time and expenses, innovation will be integral to the success in these areas. I imagine some systems we’re using today will evolve and be replaced by more readily available apps. It’s the nature of the business.