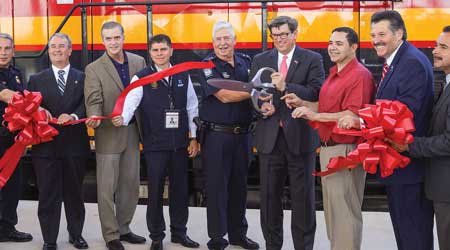 Located at the Class I’s yard in Laredo, the station is a permanent and secure structure where CBP officers and agriculture specialists can conduct rail inspections away from downtown and the U.S.-Mexico border, KCS officials said in an email. In addition, Mexico’s Servicio de Administracion Tributaria (SAT) customs agency can access the facility to conduct any necessary joint inspections with the CBP.

“Individual cars can be set out for examination and the remaining cars that have been cleared can proceed to their eventual destination quicker,” KCS officials said.

A busy border for interchanges

Laredo is North America’s largest international rail interchange point by both freight volume and value; more than 20 trains are processed there each day. Unlike at the northern border, trains interchanged at the southern border come to a complete stop to change crews, so rail operations in Laredo are approaching capacity, KCS officials said.

“This has resulted in the border becoming a bottleneck, introducing border security and public safety risks as trains queue and block multiple street and highway crossings on either side of the border during the crew change process,” they said.

No longer changing crews on the international bridge is one aspect of the strategy. Another is changing the interchange location from the middle of the bridge to KCS’ Laredo yard, which allows northbound and southbound trains to operate in one continuous movement between Mexico and the yard, KCS officials said.

The CBP has worked with the Class I on admissibility and requirements for international crews to enter the United States for interchange operations.

The new process is opposed by the Brotherhood of Locomotive Engineers & Trainmen (BLET) over concerns about safety and Mexican train crews replacing U.S. crew members. [Editor’s note: The BLET and SMART Transportation Division have filed a joint petition against the Federal Railroad Administration alleging the agency is allowing Mexican crews from Kansas City Southern de Mexico to operate trains in the United States in violation of federal law and safety practices.]

But KCS tries to coordinate with the FRA to ensure safety standards are maintained, and its engineer and conductor certification program is in compliance with regulations, KCS officials said. The Class I also engages with local, state and federal representatives to address community needs.

Going forward, KCS plans to expand the deployment of international crews, and continue the process improvements and collaboration activities with the CBP and SAT at the Laredo gateway.