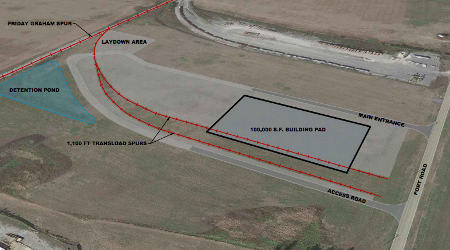 State and local leaders last week broke ground on a project to improve and expand rail service to the Port of West Memphis, Arkansas.

The project includes construction of a new facility that will allow various commodities to be transferred between road and rail at the port's International Rail Port Logistics Park, West Memphis officials said in a press release.

When completed, the facility will open up more space for rail service at the port. A federal Transportation Investment Generating Economic Recovery (TIGER) IV grant will fund the $10.9 million project.

Currently, Union Pacific Railroad serves existing businesses along the city-owned short line that serves the park. However, BNSF Railway Co. also operates in the area, and discussions are underway with both railroads for dual access to the port in the future, West Memphis Economic Development Director Phillip Sorrell said in an email.

The facility will help area manufacturers and logistics firms be more competitive by offering access to two major interstates, Class I railroads and a Mississippi River port.

"This is one of the few locations in the Mid-South where this is possible — where all three modes are totally accessible and reliable," Sorrell said in the press release. "Whether fuel prices are high or river levels are low — shippers have multiple options regardless of conditions."