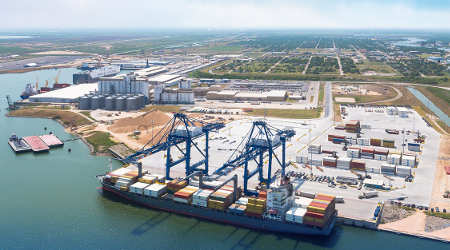 Port Freeport has awarded a more than $21 million contract to Primoris Heavy Civil to build rail infrastructure at the southeastern Texas port.

Part of Primoris Services Corp., Primoris Heavy Civil will construct a rail spur and yard that includes 21,000 linear feet of track, as well as complete associated high-mast lighting, paving and drainage work. The rail spur will tie into a Union Pacific Railroad line and support an ongoing expansion at the port. Work is scheduled to start in the third quarter and conclude in second-quarter 2018.

The Brazoria Fort Bend Rail District has contracted Freese and Nichols Inc. to serve as project manager for a proposed 60-mile rail line that would run between the port and Rosenberg, Texas. The project is designed to accommodate an anticipated traffic boon in the area after the port's channel is deepened and larger ships call on Freeport.

Construction on the line is projected to start next year and take about two years to complete. UP, BNSF Railway Co. and Kanas City Southern operate lines into Rosenberg.