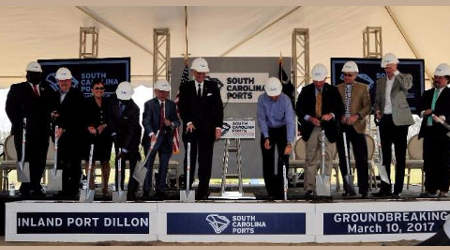 The South Carolina Ports Authority (SCPA) broke ground late last week on Inland Port Dillon, a facility slated to open early 2018 to help handle the growing intermodal volumes between the Port of Charleston and markets in the Carolinas, Northeast and Midwest.

Inland Port Dillon's initial phase is expected to handle at least 45,000 containers annually, offering overnight access to and from Charleston via an existing CSX mainline, port officials said in a press release.

Inland Port Dillon's location is close to Interstate 95, a critical transportation artery in the Southeast. The area is central to a significant base of existing port users that represent base cargo opportunities, they said.

"Inland ports provide infrastructure in the interior of the state that supports the movement of freight to and from our marine terminals," said SCPA President and Chief Executive Officer Jim Newsome. "Our facilities in Dillon and Greer are important to SCPA's overall volume growth and the significant amount of cargo that moves today by rail."

SCPA announced the project in April 2016. To date, the authority has completed the initial design phase, along with permitting and equipment requisition process for the facility. The authority will soon award contracts to begin construction of the terminal.