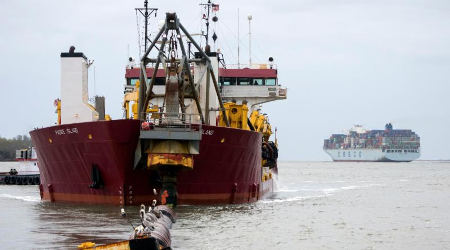 The U.S. Army Corps of Engineers has finished outer harbor dredging for the Port of Savannah's harbor deepening project.

Completion of the outer harbor dredging marks the midpoint for the overall expansion project and represents a "crucial milestone," Georgia Gov. Nathan Deal said in a press release.

Deepening the harbor will enable Neo-Panamax vessels — i.e., larger ships passing through the expanded Panama Canal — to bring heavier loads into the port and transit the Savannah River with greater scheduling flexibility.

A study conducted by the Corps of Engineers estimates that the deepening of the harbor will result in $282 million in transportation savings for shippers and consumers each year, according to Deal's press release.