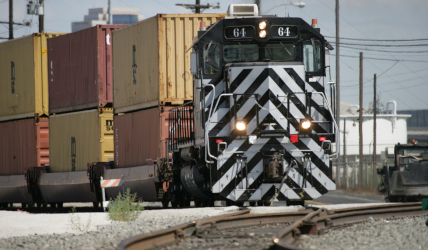 The Port of Long Beach in California last week announced the completion of the Double Track Access project from Pier G to Pier J, which added a second rail line to boost capacity.

The 8,000-foot-long line enables four terminals in the south basin area to simultaneously handle arriving and departing trains. Construction started in February 2020 on the project, which is expected to increase rail efficiency at Piers G and J up to 25%. It also is expected to reduce conflicts with neighboring terminals' on-dock rail operations.

The $34.7 million project was partially funded with a $14 million grant from California's Trade Corridor Enhancement Program. POLB covered the remainder of the costs.

The project is part of the port's ongoing rail infrastructure capital improvement program aimed at shifting more cargo to rail, one of the goals of the 2017 update of the San Pedro Bay Ports Clean Air Action Plan.

"This project will streamline operations and reduce truck trips at a time we are experiencing an unprecedented growth in cargo,” said POLB Executive Director Mario Cordero in a press release. "Our investments in on-dock rail will help the port remain globally competitive and environmentally sustainable well into the future."