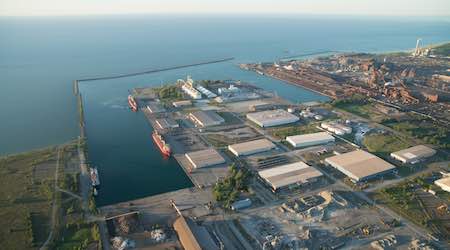 U.S. Transportation Secretary Elaine Chao confirmed the port received congressional approval for the grant, according to a Ports of Indiana press release.

The grant is part of the Fostering Advancements in Shipping and Transportation for the Long-Term Achievement of National Efficiencies (FASTLANE) program, now known as the Infrastructure for Rebuilding America program.

The grant will be used to fund a $19.7 million expansion aimed at increasing the port's cargo handling capacity and multimodal capabilities.

The expansion will include the construction of a 2.3-acre cargo terminal with multimodal connections for handling cargo transfers between ships, barges, rail cars and trucks. In addition, 4.4 miles will be added to the port's existing 14-mile rail network. Two new yards will create storage for 165 rail cars, accommodate a 90-car unit train and provide rail-car switching within the port.

"This new investment will not only improve the region's economic vitality, but also the international competitiveness of our entire state," said Indiana Gov. Eric Holcomb.