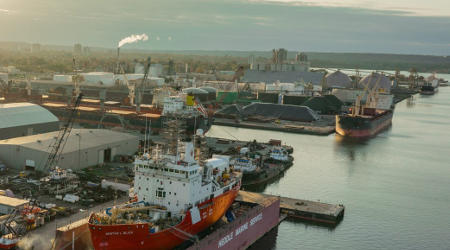 Transport Canada announced yesterday it will invest CA$17.7 million in the Port of Hamilton expansion plan, which will include rail infrastructure upgrades and the construction of a multi-user bulk storage warehouse.

The expansion also calls for a new dock wall to be built at the port's busiest pier. The rail infrastructure improvements will increase capacity to allow more rail providers to access the Ontario port, according to a Transport Canada press release. The port is served by CN and Canadian Pacific.

The federal dollars will come from the government's National Trade Corridors Fund and will be matched by the Hamilton Port Authority (HPA) in support of the port's CA$35.45 million Westport modernization project, port officials said.

HPA's plan for Westport is to create a multimodal transportation hub. Currently, not all areas of the Westport zone are accessible by rail from other areas of the port, they said.

The federal investment announced yesterday will help strengthen Canada's trade connections to European, African and South American markets while providing a greater flow of cargo through the port to greater Toronto and its "horseshoe" region, government officials said.