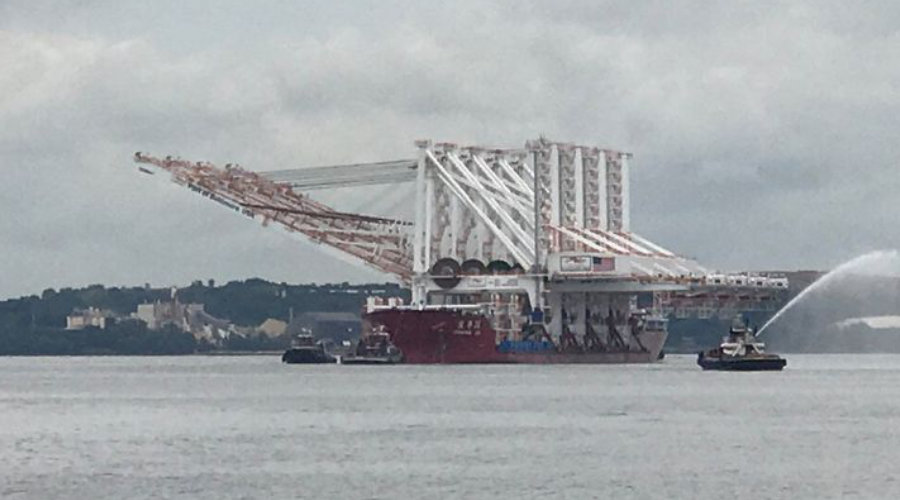 The cranes were delivered aboard the Zhen Hua 24 from China, and were greeted by officials from the Maryland Department of Transportation Maryland Port Administration (MDOT MPA) and its public-private partner, Ports America Chesapeake.

The new cranes are fully electric, and thus emit no diesel emissions. Each measures 450 feet tall and weighs about 1,740 tons – 25 feet taller and 190 tons heavier than the Port’s first set of Neopanamax cranes that arrived in 2012. The new cranes can each extend to reach 23 containers across on a ship and lift 187,500 pounds of cargo. Ports America Chesapeake will test and prepare the cranes over the next few months, and they are expected to be fully operational in early 2022, MDOT MPA officials said in a press release.

The cranes are part of a significant expansion by Ports America Chesapeake at Seagirt to provide greater capacity and efficiency to handle anticipated increases in container volumes. The $166 million investment in terminal and yard upgrades includes a second, 50-foot-deep berth to accommodate mega-ships; new container handling equipment such as 15 hybrid-electric gantry cranes; and a new truck gate complex.

Complementing the new Seagirt berth are plans to expand Baltimore’s Howard Street Tunnel, which will allow for double-stacked container rail cars to travel to and from the port, clearing a longtime hurdle and giving the East Coast seamless double-stack capacity from Maine to Florida.

There is a need for more gateways such as Baltimore to handle cargo in the United States. Import/export demand for container cargo has substantially increased over the past year and with that, port congestion is an all-time high, port officials said.

Due to the high number of local distribution, fulfillment and sorting centers in the area, Baltimore is a prime gateway for goods heading to the e-commerce market and for cargo sent to the Midwest via rail, they added. Over the past  year, the port has served 23 “ad hoc” ships — vessels diverted to Baltimore that were not on a regularly scheduled service call — totaling more than 35,000 20-foot-equivalent unit containers.

"The port’s container business has grown impressively in recent years and is poised to grow even more with the addition of these new ultra-large cranes," said Maryland Gov. Larry Hogan, who joined port and MDOT officials to view the cranes’ arrival. "Thanks to our MDOT MPA team and our partners at Port America Chesapeake, the Port of Baltimore is well-positioned to continue as one of Maryland’s prime economic engines."