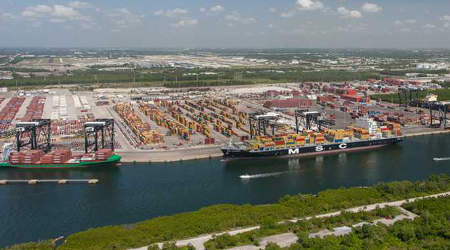 Port Everglades in Broward County, Florida, is nearing the end of the design phase of its plan to install three new super post-Panamax container-handling gantry cranes.

The port's Chief Executive Officer Steven Cernak has issued a second notice to proceed to begin manufacturing the cranes, which are valued at $13.8 million each. They are being manufactured by Shanghai Zhenhua Heavy Industries Co. Ltd. Inc. of China (ZPMC), according to a Broward County press release.

"This is a significant step toward the delivery and installation of the first three super post-Panamax cranes later next year," Cernak said. "Our customers need larger cranes now to be able to handle cargo already arriving on larger ships from South America and Europe."

ZPMC executives are in Florida to meet the port's cargo terminal operators and inspect the progress of improvements to the crane-rail infrastructure that is already underway on the Southport docks.

The port has options to purchase up to three additional cranes over the next five years.

The new cranes are part of the port's largest expansion in its history. Other aspects of the expansion include lengthening the Southport turning notch from 900 feet to 2,400 feet to allow for up to five new cargo berths.