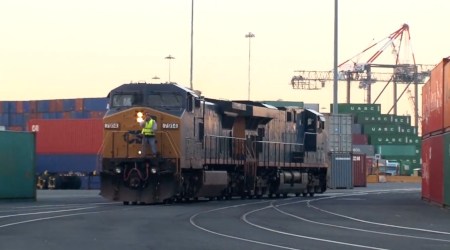 The Port Authority of New York and New Jersey (PANYNJ) in March logged 58,877 containers by rail, a new all-time monthly high that bested the previous record set in March 2018 by 11 percent.

The port in March also handled 585,083 20-foot equivalent units (TEUs), the most ever for that month, which represented a 4 percent increase over the previous record of 572,572 TEUs set in March 2018.

Cargo growth in March was bolstered by a 12 percent year-over-year increase in export container volume, PANYNJ officials said in a press release.

In the first quarter, the port handled approximately 1.8 million TEUs, up 6.7 percent.