Representatives for U.S. Reps. Markwayne Mullin (R-Okla.) and Jim Bridenstine (R-Okla.) were also in attendance at the May 10 ceremony. 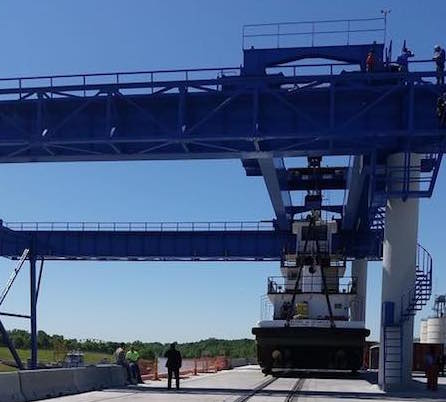 The port's newly renovated 200-ton bridge crane.
Photo: NRC
At the event, the City of Tulsa-Rogers County Port Authority marked the completion of the port's main dock renovation project, which called for replacing the 26,000-square-foot yard surface of the 45-year-old dock, constructing more than 6,000 track feet of new rail and renovating the 200-ton bridge crane.

The more than $11 million project took more than two years to finish, NRC officials said in a press release.

Located at the head of the navigation for the McClellan-Kerr Arkansas River Navigation System in northeast Oklahoma, the Tulsa Port of Catoosa is one of the largest, most inland river-ports in the United States, NRC officials said.