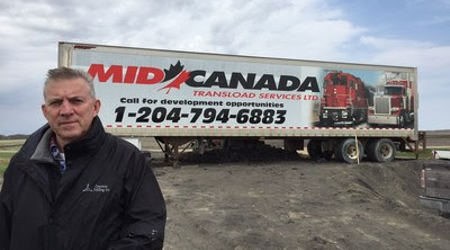 The port will be built on a 250-acre green field site 1 mile south of Letellier, Manitoba, and 7 miles from the U.S. border. The new facility will be one of the largest privately owned inland ports in the Canadian province, Mid Canada officials said in a press release.

Located along Manitoba's major export Highway 75, the port will have access to CN and BNSF Railway Co. The site will have daily rail service to and from the United States and Mexico, company officials said.

The concept of a new transloading site is the idea of Real Tetrault, chief executive officer and president of Emerson Milling Inc., an oat milling plant in Emerson, Manitoba. Emerson Milling is already shipping oat products via CN into the United States and Mexico. That led to the idea of building an industrial park to transload other products that travel by rail but still require a truck to move product to and from the rail site, according to the press release.

"Our plan is to service the agricultural industry, mainly, number one," said Tetrault in an interview on the Pembina Valley Online website. "We want to do a lot of the one to five to 10 cars that are going to customers in the U.S. and Mexico. We also want to transload/offload other products that are coming into Manitoba or Saskatchewan. I think we can service eastern Saskatchewan quite well from this location."

"This development is strategically positioned with direct links to international markets," Cullen said. "Manitoba producers, processors and small and mid-size shippers will benefit from the opportunities this new inland port will provide."