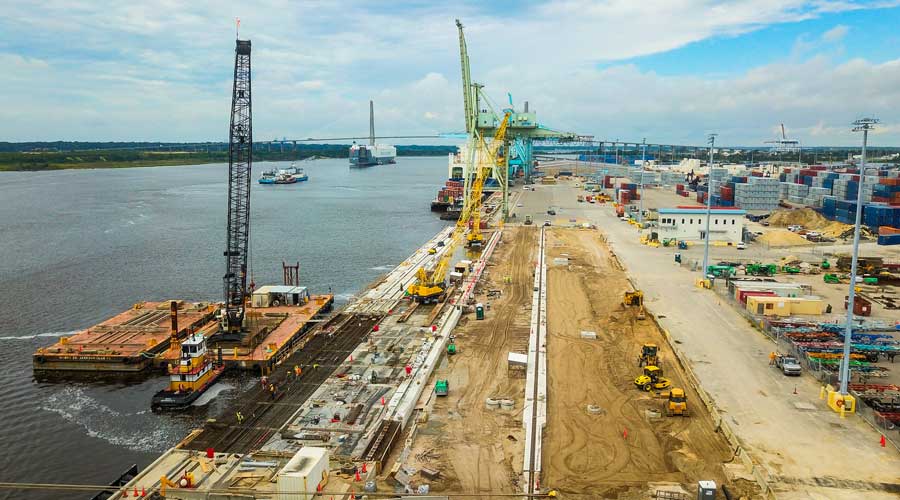 The next phase of a $109 million, berth reconstruction project at the Jacksonville Port Authority's (Jaxport) Blount Island Terminal in Florida is set to be completed in December, port officials announced yesterday.

Contractors are making "significant progress" on the project's latest phase to make berth enhancements at the existing SSA Jacksonville Container Terminal at Blount Island, Jaxport officials said in a press release. An additional 700 linear feet of newly rebuilt deepwater berthing space is set to be completed in December, while another 700 linear feet is expected to be finished by the end of 2021.

Combined with the first phase of berth enhancements that have been in operation since 2017, the container terminal will feature two reconstructed 1,200-foot-long container berths capable of simultaneously accommodating two post-Panamax vessels. The berths are electrified to handle up to six electric-powered 100-gauge container cranes, including three now in operation.

SSA Jacksonville Container Terminal is about 80 acres, with the capacity to expand up to 120 acres. Phased yard improvements are underway that will allow the facility to accommodate up to 700,000 20-foot equivalent units of cargo annually.

The federal project to deepen the Jacksonville shipping channel from its current depth of 40 feet to a depth of 47 feet is anticipated to be completed by the end of 2022.