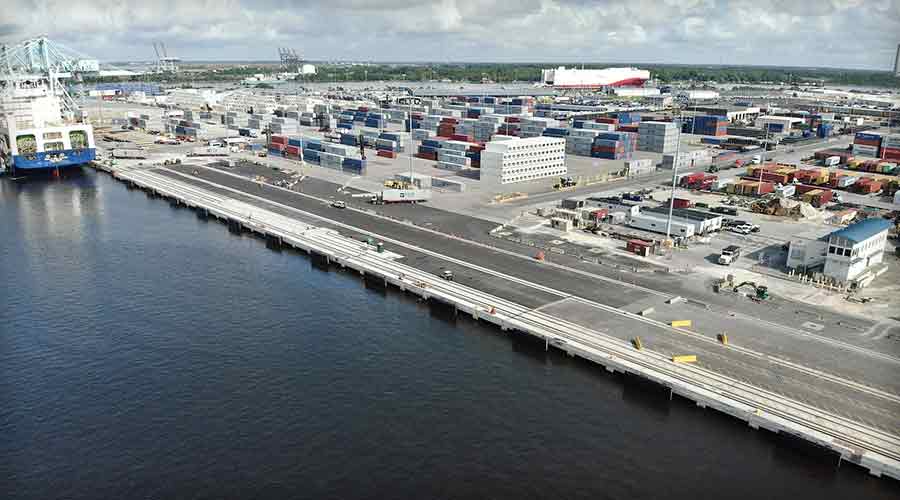 The Jacksonville Port Authority (Jaxport) announced yesterday it has completed the final phase of berth improvements at Blount Island Terminal.

The terminal now has a channel depth of 47 feet with 2,400 linear feet of newly rebuilt berthing space capable of accommodating two post-Panamax ships, Jaxport officials said in a press release. The project, 75% of which was funded by the Florida Department of Transportation, cost $100 million and began in 2016 with the installation of a high-voltage electrical system that can power up to 10 container cranes. The remaining 25% was funded by Jaxport.

The berths now offer on-dock rail service for cargo handling with heavy-lift capabilities, including one of the nation's highest weight-bearing capacity docks.

The berths were reconstructed in a series of four phases, and the upgrades allow for increased energy efficiencies, emissions reductions from diesel-powered cranes and enhanced nighttime operations through LED lighting.

The port is still working on more improvements, including $72 million in phased yard upgrades to enable the Jacksonville Container Terminal to handle 500,000 20-foot equivalent units annually. That project is funded by SSA Atlantic Inc., which operates the terminal, and a $20 million grant from the U.S. Maritime Administration.

Jaxport is served by the Jacksonville Port Terminal Railroad, which is operated by Watco on 10 miles of track. The short line offers access to CSX and Norfolk Southern Railway lines.