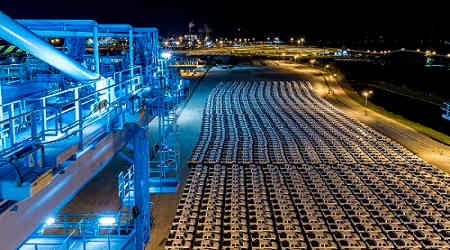 The Jacksonville Port Authority (JAXPORT) has begun construction of a new automobile processing terminal, the first phase of a multi-year project aimed at increasing the port's vehicle handling capacity by 25 percent.

When completed, the new terminal will add more than 100 acres of processing and storage space at the port's Dames Point Marine Terminal.

The facility will offer vessels direct waterside access for loading and unloading, with major interstates less than a mile away as well as the potential for rail capabilities, port officials said in a press release.

JAXPORT's expansion plan follows a record year of vehicle volumes. In fiscal-year 2017, the port moved 693,000 total units, the most in its history. Continued growth of the port's three auto processors has led to increased demand for more vehicle space, port officials said.

"The steady growth of our auto business speaks volumes about our efficiencies," said Roy Schleicher, JAXPORT Executive Vice President and Chief Commercial Officer. "We are committed to supporting our auto partners with the tools they require to continue to expand their businesses in Jacksonville."

The three auto processors at the port are AMPORTS, Wallenius Wilhelmsen Logistics and Southeast Toyota Distributors.