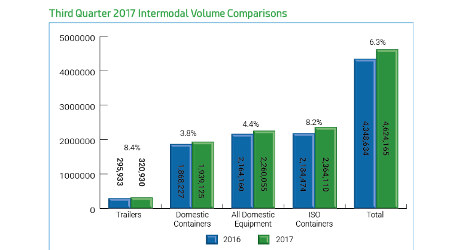 The seven highest-density trade corridors accounted for 62.9 percent of total volume and were up collectively 5.2 percent in the quarter. The Eastern-Western Canada corridor, up 12 percent, showed the largest gain.

Three other lanes exceeded 5 percent growth after incurring losses in third-quarter 2016: the South Central-Southwest, up 9.2 percent; Southeast-Southwest, up 7.7 percent; and the Northeast-Midwest, up 5.9 percent.