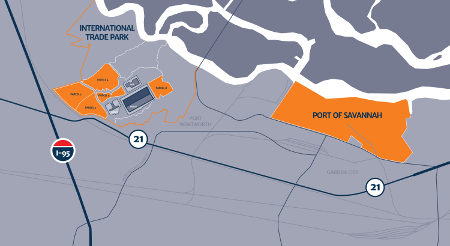 The Georgia Ports Authority (GPA) yesterday announced the sale of 500 acres for commercial development to accommodate customer demand for warehouse, distribution and transload facilities near the Port of Savannah.

The new development, located on five parcels at the port's Savannah River International Trade Park, is less than 5 miles from the Garden City Container Terminal, authority officials said in a press release.

The project is just 1 mile from Interstate 95 and will help fill a growing need to service a larger range of customers from the Southeast to the Midwest, they said.

"With an increased demand for reliable, cost-effective logistics opportunities, this development is another example of GPA's focus on supply chain solutions for our customers," said Executive Director Griff Lynch.

"Keeping ahead of demand requires infrastructure development in both the public and private sector. The new facilities destined for our trade park are part of that equation," said GPA Chairman Jimmy Allgood. "The GPA is also making the on-terminal improvements necessary to stay ahead of demand."

Other efforts to increase capacity at GPA include a rail expansion project at the Garden City Terminal, which is served by Norfolk Southern Railway and CSX. The project will double the Savannah port's rail lift capacity to 1 million containers per year and enable the terminal to accommodate 10,000-foot long unit trains.

Partially funded by a $44 million federal grant, the terminal expansion is expected to be completed in 2021.

The results represented a 15 percent increase over December 2015, they said in a press release. TEU counts at the port have been climbing since September.

"Our customers are bringing in higher volumes of consumer goods such as produce, clothing and household goods as the region's population increases," said Port Everglades Chief Executive and Port Director Steven Cernak. "It's an indication of a strengthening economy."

Much of the increase was due to a "resurgence in the Costa Rica and Dominican Republic markets, including perishable products," port officials said. Those market increases also are partially attributable to the change in vessel sharing agreements between Crowley Liner Service and Seaboard Marine.

"Port Everglades helped spearhead a pilot program to bring refrigerated produce from South America directly to Florida, when it was previously restricted to only coming into northern U.S. ports," said Jim Pyburn, the port's business development director. "The pilot program was a great success and now we are seeing a wider variety of produce coming to South Florida faster and fresher than when it was trucked here from the Northeast."