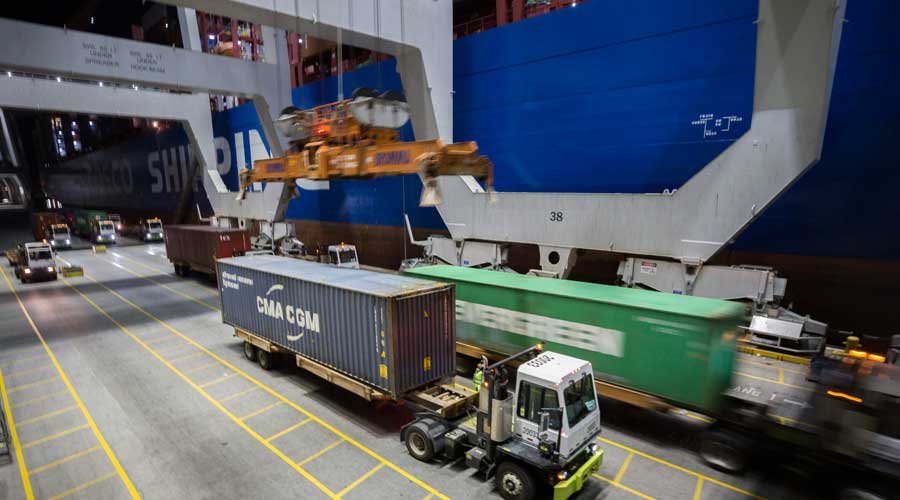 Despite the impact of disruptions caused by the COVID-19 pandemic, total tons crossing all GPA docks in fiscal-year 2020 reached a record 37.77 million, up 0.6 percent, or 223,000 tons, compared with FY2019. Container tons increased 2 percent to 33.5 million tons for the fiscal year ended June 30, another record.

"Cargo volume reductions related to COVID-19 were offset by the strength of our export markets and record volumes earlier in the year," said Griff Lynch, GPA's executive director in a press release.

Even during the challenging times, port activity, coupled with ongoing expansions such as the harbor deepening and Mason Mega Rail projects, have quickened the pace of commercial infrastructure investment. According to the latest report from Colliers International, 5 million square feet of industrial space are under construction in the Savannah market. In addition, Savannah is home to a total of 74.4 million square feet of warehouse and manufacturing space, GPA officials said.

At yesterday's GPA board meeting, Lynch reported the first nine of 18 Mason Mega Rail tracks now are moving cargo at the Savannah port, two new mobile harbor cranes have been added to Savannah's Ocean Terminal and a new container yard will be completed at Ocean Terminal by year's end.

In addition, 20 new rubber-tired gantry cranes are scheduled to arrive at Savannah terminals by December, three new rail-mounted gantry cranes are scheduled to go into service by the end of FY2021, and construction soon will start on the upcoming straightening of Bert 1 at Garden Cit Terminal to handle more than 15,000 TEU vessels. GPA is also upgrading Berth 2 at Colonel's Island in Brunswick for dedicated roll-on, roll-off service.

The nine working Mason Mega Rail tracks mark a milestone for the Mason Mega Rail project, which has been in the works for more than four years and is designed to expand service to the U.S. Southeast and Midwest.

When completed, the Mason Mega Rail Terminal will double the Port of Savannah's rail capacity to 2 million TEUs per year.