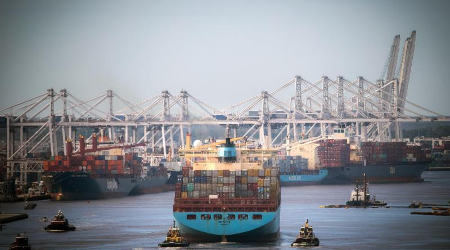 The harbor expansion project is designed to deepen the inner harbor to 47 feet at low tide, 54 feet at high tide. Soon, the river entrance channel of the project will benefit ship traffic by opening a wider tidal window and greater flexibility for neo-Panamax vessels, Lynch said in a prepared statement.

Currently, the Port of Savannah is serving vessels up to 10,700 20-equivalent units (TEUs) and is expected to handle 13,000 TEU vessels in May, Lynch said.

Meanwhile, at the Port of Brunswick, the fiscal-year 2017 entrance channel maintenance dredging was completed in March. As a result, the U.S. Army Corps of Engineers estimates channel depths up to 37 feet, the deepest draft for Brunswick in several years, according to Lynch.

"Expanding the Savannah Harbor and maintaining Brunswick's deeper draft are vital links to the future of maritime trade in Georgia," Lynch stated. "Along with other efforts to expand the state's logistics network, these initiatives will strengthen Georgia's position as a gateway to global commerce for the nation."