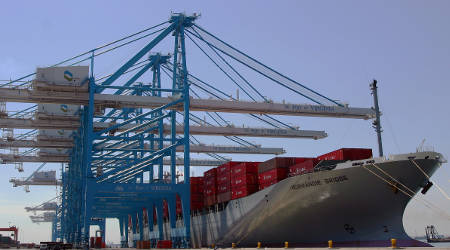 The Port of Long Beach in June handled 658,727 20-foot equivalent units (TEUs), up 9.2 percent year over year and the second-most container volume for the month in the port’s 106-year history.

Imports grew 7 percent to 335,328 TEUs, exports declined 7.7 percent to 118,304 TEUs and empty container volume climbed 26.8 percent to 205,095 TEUs.
In the second quarter, the Southern California port's total volume rose 8.3 percent year over year to about 1.9 million TEUs, and in the year's first half, its volume increased 5.1 percent to about 3.5 million TEUs.

"These are good results as we move into the busiest trade months of the year," said Long Beach Harbor Commission President Lori Ann Guzman in a press release. "The U.S. dollar remains strong and retailers are stocking back-to-school merchandise and other goods American consumers are purchasing."

"We finished fiscal-year 2017 with a solid volume increase and thus marked our fourth consecutive fiscal year of volume growth," said John Reinhart, the chief executive officer and executive director of the Virginia Port Authority, in a press release. "We moved a record amount of volume across all modes of transportation — train, barge and truck — and we continue to improve our service levels."