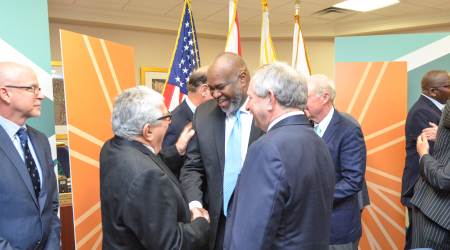 The Jacksonville Port Authority Board of Directors yesterday unanimously approved a long-term agreement with terminal operator SSA Marine for the development and operation of a $238.7 million international container terminal.

The facility, SSA Jacksonville International Gateway Terminal, will be an 80-acre expansion of SSA Marine’s current lease of 50 acres at JAXPORT’s Blount Island Marine Terminal. SSA Marine will contribute $28 million for exclusive use of the port’s three 100-gauge cranes.

Upon completion of the Jacksonville Harbor deepening project in 2023, the terminal will offer a vessel turning basin and deepwater access of 47 feet to accommodate larger container ships.

The 25-year agreement, with two five-year renewal options, includes a number of improvements to the Blount Island terminal. SSA Marine will contribute up to nearly $130 million for the use of the terminal and facility upgrades, including the addition of three new 100-gauge container cranes.