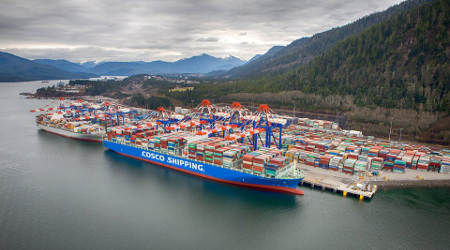 The Canadian government yesterday announced a CA$21.9 million investment in three projects at the Port of Prince Rupert in British Columbia.

The projects are designed to help local businesses by strengthening the Prince Rupert gateway, and by making investments in port infrastructure that will support future increases in Canadian trade via the port, Transport Canada officials said in a press release.

One project calls for designing tracks and bridges to replace the existing single-track Zanardi Rail Bridge. The bridge is located at the north end of the Ridley Island causeway at the rail entrance to port properties.

CN's northern mainline crosses the bridge to transport goods to and from the port's terminals. The design project is the first step in the bridge's replacement.

Another project involves the design of new track that will service a new logistics park proposed for the port. By expanding the existing Road Rail Utility Corridor development platform on Ridley Island, new development sites will be connected to the CN mainline. The corridor was built specifically to enable future development of bulk export terminals from Ridley Island.

A third project calls for an Asia-Pacific Gateway initiative to support the construction of a two-lane road that will connect the Fairview Container Terminal to Ridley Island. Construction is slated to start in early 2019.