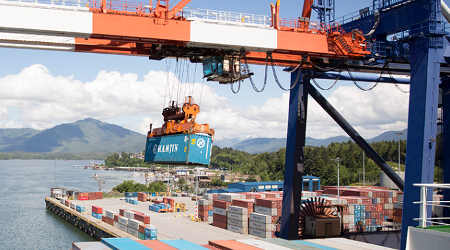 Port of Prince Rupert and DP World officials have agreed on expansion plans for the Fairview Container Terminal.

CN serves the port, which is in British Columbia.

The project calls for expanding the container yard from its current 80 acres to about 101 acres. Annual throughput capacity will be increased to 1.8 million 20-foot equivalent units (TEUs) when completed in 2022.

The project represents the terminal's second phase of expansion. The first phase was completed in 2017, when the terminal's capacity was increased to its current 1.35 million TEUs.

"The execution of this agreement signifies DP World's commitment to enabling Canadian trade with another significant investment that will bring a total of 1 million additional TEUs of container capacity to the Port of Prince Rupert in less than five years," said Port Chairman Bud Smith.

Construction will begin in mid-2019. The project will include the addition of two rubber-tired gantry cranes, as well as an eighth dock gantry crane.

"Together with our supply chain partners, this expansion, combined with CN's investments in B.C. and across its rail network, positions us to drive this unique trade gateway success story forward," said CN Interim President and Chief Executive Officer JJ Ruest.

A dollar value of the expansion project was not released.