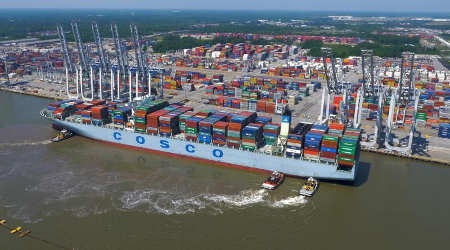 The Port of Savannah handled more than 4 million 20-foot equivalent units (TEUs) in 2017, an 11 percent increase and the port's highest annual volume ever, the Georgia Ports Authority (GPA) reported yesterday.

Last month, the GPA handled 323,000 TEUs, up 10.6 percent compared with a year ago and the busiest December in the authority's history.

"This is the first time we've handled more than 4 million TEUs in a 12-month period, which is an important milestone for Savannah," said GPA Executive Director Griff Lynch in a press release. "These numbers clearly show that Georgia has the fastest growing and most critical port in the Southeast."

The GPA is scheduled to break ground on the Mason Mega Rail terminal in early spring. The project will double Garden City Terminal's rail lift capacity to 1 million containers per year, and is expected to be completed by the end of 2020.