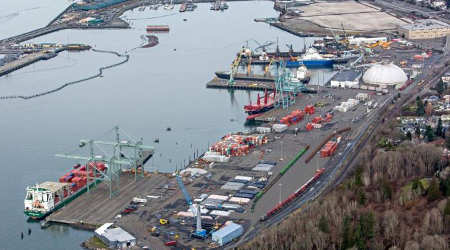 The Port of Everett Commission in Washington has authorized its staff to solicit construction bids for the $36 million South Terminal modernization project.

The project, combined with the double rail siding now under construction, will ensure the port will be able to accommodate the next generation of over-dimensional cargo, including aerospace parts, port officials said in a press release.

The South Terminal is a key piece of the project. In 2015, an earlier phase of the modernization strengthened 140 feet of the dock. The project's next phase aims to strengthen the remaining 560 square feet of the 700-foot terminal dock structure and make electrical upgrades at the wharf.

Upon completion, the dock will be able to accommodate two, 100-foot gauge rail-mounted container cranes and provide the vaults for shore power. The bid package is expected to be issued late next month.

Construction is slated to begin in April 2018 and end in December 2019.

The South Terminal project has received $22 million in state and federal funding, including a $10 million grant through the federal Transportation Investment Generating Economic Recovery grant; $1.8 million through what is now known as the federal Infrastructure for Rebuilding America program (formerly FASTLANE); $5 million in a state rail loan; and $5.2 million in federal Rail Rehabilitation Innovation Financing.