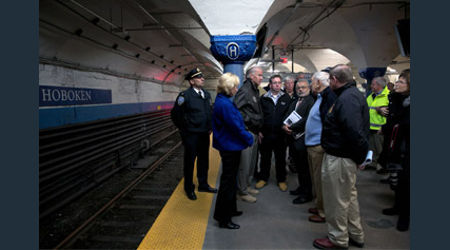 The Port Authority of New York and New Jersey (PANYNJ) has invested $1 billion to restore and protect its infrastructure since Hurricane Sandy struck five years ago this month.

The authority has plans to invest the remainder of the estimated economic loss of $2.8 billion in the coming years to further rebuild and add resiliency to port assets, according to a PANYNJ press release.

In the days after the storm hit the region, authority officials worked quickly to repair and reopen critical facilities such as the airports, tunnels, Port Authority Trans-Hudson rail system and port terminals.

After the immediate repair and recovery efforts were completed, the authority began planning and undertaking projects to protect port assets from future catastrophic storms. In 2013, the authority created a Storm Mitigation and Resilience Office to focus on rebuilding and resiliency efforts.

Over the past five years, the authority has completed more than 80 projects, with another 65 Sandy-related capital projects in progress.

The Federal Transit Administration and the Federal Emergency Management Agency have and will continue to provide grant funding essential to PANYNJ's recovery, repair and resiliency initiatives, authority officials said.

"We are laser-focused on ensuring the transportation assets we own and operate are rebuilt to standards that reflect new and evolving expectations of severe weather and climate change, so that we minimize the risk of major disruptions and shutdowns when major storms hit," said PANYNJ Executive Director Rick Cotton. "We will continue to review, evaluate and explore innovative ways to protect our assets and ensure we have best-in-class systems in place at our facilities."