Several years ago, the CAD II system in use wasn’t meeting efficiency and safety needs. That prompted a multiyear effort by several UP departments to develop CADX, now fully implemented as the third generation of the railroad’s CAD system.

The state-of-the-art system is designed to process track data and train timetable information in real time so signals and switches are more accurately aligned.

CADX reduces the number of transactions a dispatcher must make so he or she can focus on keeping trains moving. The system helps dispatchers foresee potential problems and automatically place restrictions and authorities on specific locations.

The Class I now can employ CADX with positive train control and other technologies to “engineer out” risks and provide more worker protections, UP executives say. Such automation brings critical components of the railroad into the modern era, they say. 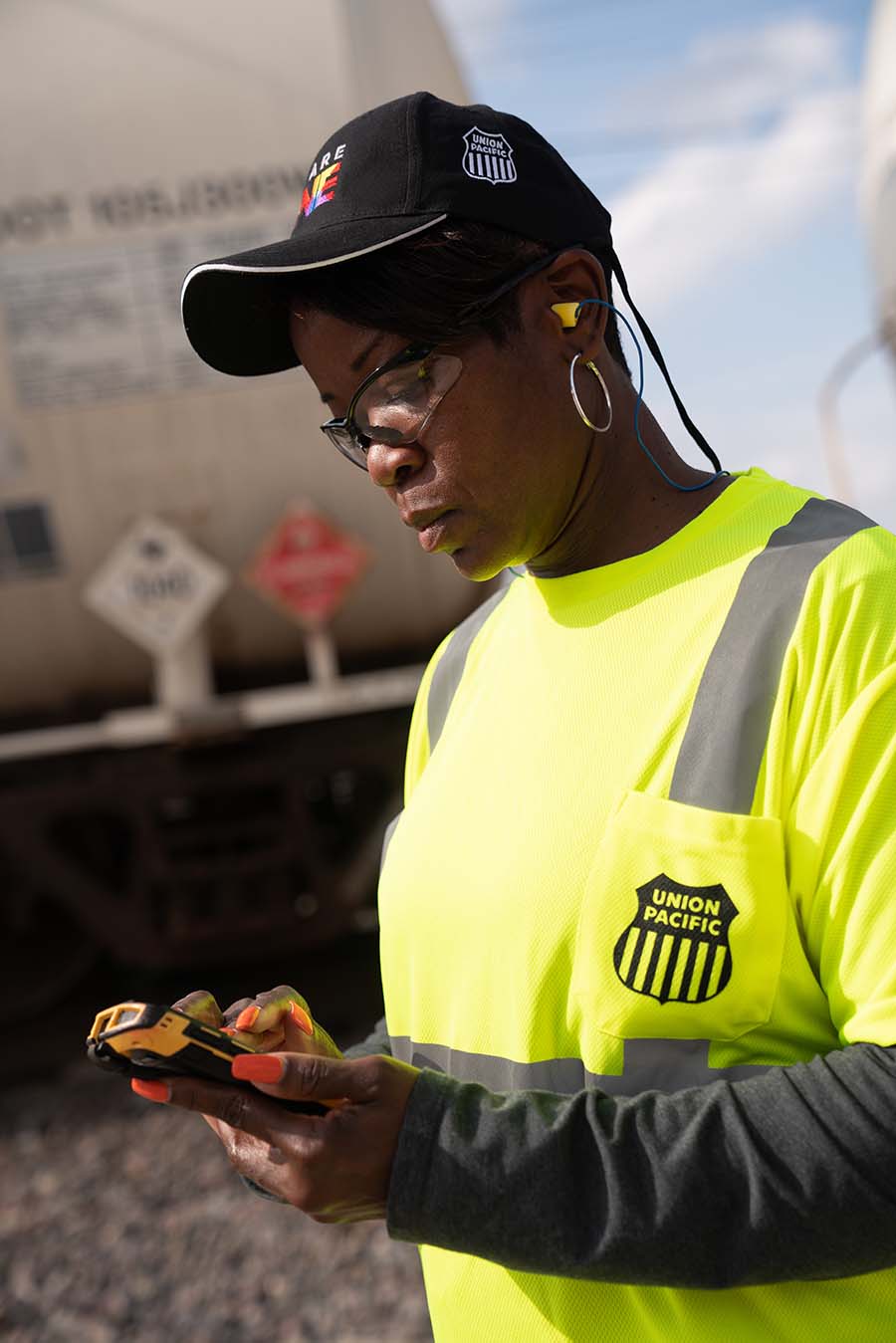 “We can address customer pain points and give real-time information. Then the customer can react on their end in the way they need to,” says Patel, who also heads UP’s strategy and transformation office. “We try to look at technology differently, from an outside-in lens.”

To that end, it’s vital to reduce “friction” for external and internal customers so business processes and tasks are easier to perform, Patel says. Friction refers to process impediments and complications.

“You need to know how to reduce friction in day-to-day business,” says Patel. “You see how Amazon makes it easy to shop online.”

In addition to CADX, UP is counting on three other technologies recently developed in house to help cut down on friction and up the automation ante: UPGo, DigiCrew and Intermodal Vision. Following are details, goals and breakthroughs for all four.

It took more than a year to fully implement CADX from the first to last dispatcher’s desk — 472 days to be exact. The system now is accessed at 73 dispatcher desks in nine locations.

CADX incorporates 35,252 track miles in UP’s network, including 1,023 subdivisions and industrial leads, and nearly 70,000 assets, such as switches, signals, milepost markers and signs.

CAD systems have been around for a long time and have changed through multiple iterations, says Patel. CADX addresses friction and increases efficiency by reducing transactions. Track data and timetable information is embedded in the system.

“Before, a dispatcher needed to hit three keys to get to one screen or one command. This streamlines that,” says Patel.

CADX also is a more intuitive system — so much so it reduces dispatchers’ overall training time from six to four months. A safety feature tracks data integration and ensures protection is placed at the correct location without relying on external tools.

“It’s designed with the user in mind, in real time,” says Patel.

CADX provides more control and safety edits than the previous CAD system. It features workstations with streamlined forms to improve a dispatcher’s execution time on tasks and individual functions.

The intellectual property and control gained from CADX will enable UP to more quickly and efficiently integrate other functions into the system, such as weather alerts and grade crossing protection automation.

After observing usage of the system over the past year, there are a number of enhancements that can be made in the not-too-distant future, Patel believes.

Developed about two years ago, UPGo is a smartphone and mobile device application that UP considers a “fast pass” for truck drivers at its intermodal terminals. The Class I continues to enhance the app, which is designed to help truck drivers more quickly enter and exit ramps.

Available at all of UP’s 32 intermodal terminals, UPGo can be used to process in-gate and out-gate validations prior to entering and exiting a ramp. The app is designed to prevent information errors, reduce gate delays, cut dwell time and increase safety.

Drivers can use the app to complete paperwork digitally and pull up necessary information — such as a parking spot location in real time — before arriving at a ramp. They also can obtain safety rules and a ramp’s gate hours, and use a map function to find a tunnel’s location.

“UPGo is a one-stop shop that’s more automated and reduces time,” says Patel. “It’s another way to make it easier to do business with us.”

To further enhance fluidity at intermodal terminals and standardize visual cues, UP has installed uniform UPGo signage at ramps.

Fluidity is vital at all terminals, and UPGo is helping in that regard, says UP General Director of Intermodal Operations Luke Slawson.

“Our key to success is receiving or sending out a train on time,” he says.

So far, more than 64,000 truck drivers have downloaded UPGo. The app’s adoption rate reached 63% late last year, up nearly a third from the rate at 2020’s end. Dedicated UPGo lanes at ramps with automated gate systems (AGS) — which help speed a truck driver through a gate — are positively impacting usage, says Slawson.

“Drivers see their peers getting in and out of a ramp faster, which helps with the adoption rate,” he says.

In first-quarter 2021, UP conducted a survey of 3,000 truck drivers to learn how the app could be improved or enhanced. An issue mentioned by many survey respondents was UPGo’s language barrier, since the app was available only in English and Spanish. Now, it’s available in six languages, including Mandarin and Russian, says Elise Gosch, UP's assistant vice president of marketing and sales-premium intermodal.

UP also enhanced the app’s digital tutorials and maps, which now feature color coding to help drivers more quickly locate a particular area in a ramp.

“This has been transformational in the sense that we can track people in our terminals,” says Gosch. 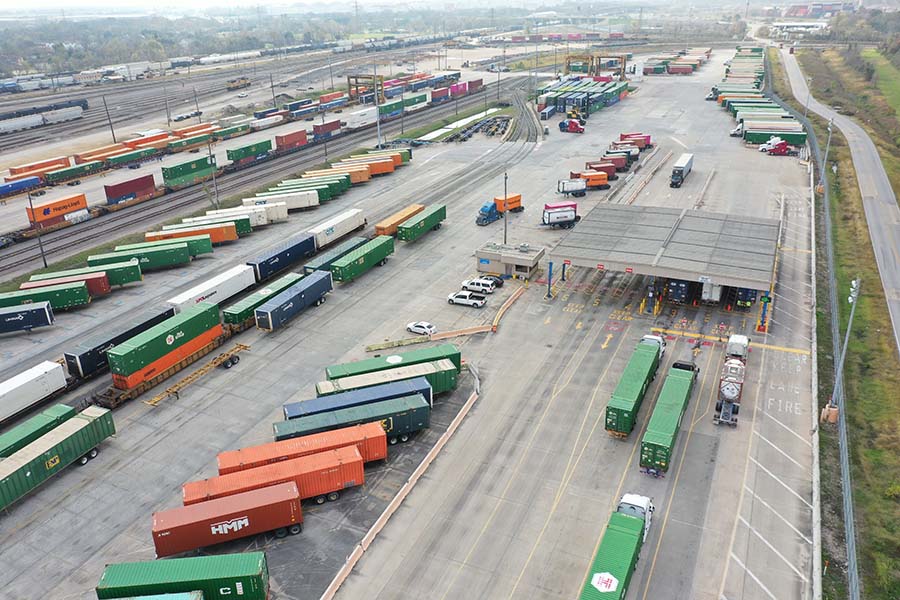 The emergence of UPGo prompted the removal of biometric devices at 14 terminals’ gates.

“That was a great technology at the time, but now in this age of COVID, who wants to put their finger on something?” Gosch says.

In the near future, UP plans to make UPGo available on additional styles of smartphones and devices, as well as on drivers’ company-provided tablets.

“They want to use it with their own business processes,” says Gosch.

Last year, a pilot was launched at UP’s San Antonio terminal involving the combination of both AGS and UPGo. One result: drivers’ roll-in time at the gate dropped 70%, Gosch says.

“Since that pilot is going well, we will expand it to other terminals,” she says, adding that the next one likely will be UP’s terminal in Mesquite, Texas, near Dallas.

DigiCrew: From many apps to one interface

Developed about a year ago, DigiCrew is an app designed to fundamentally change the way train crews and other workers interact with their mobile device while performing day-to-day tasks. DigiCrew’s functionality combines work previously done in multiple apps — such as in mobile work order and mobile terminal — in a single interface.

For example, workers at Hinkle Yard in Stanfield, Oregon, use DigiCrew to line power switches from a handheld device in the field instead of going to a computer stationed at the end of the yard.

Employees also can use the app to find out what shift they’re working next, if they have any vacation time left or other work-related information.

DigiCrew currently is being used networkwide by all yard and local train crews. Many of them use the app on a Zebra handheld device.

UP expects all train, engine and yard employees to use DigiCrew by 2022’s end.

Workers previously needed to print out a lot of documents prior to performing tasks, but that information now is digitized in the mobile app.

Currently used at 25 intermodal facilities — including all major ones — the app shows how many and what type of containers are coming so that information can be compared against the number of available chassis at a terminal.

“You can see a train in California that’s coming to your ramp. The app can tell you the type of chassis needed, and then you have two to three days to resolve that in advance,” says Slawson.

Without Intermodal Vision, managers need to view multiple screens, reports and systems to determine how their ramps are operating. That approach lacks integration and a holistic view or set of data, Patel says.

Managers also only had access to key data and metrics a day later instead of in real time.

“Before there was more legwork to making decisions at ramps, and it was more time consuming. With Intermodal Vision, you get quicker visibility of your thresholds,” says Slawson.

Intermodal Vision was developed via a multi-team effort between the technology, marketing and sales, and intermodal operations departments.

The tool will help the Class I more effectively compete in the intermodal space by increasing customer engagement and operational efficiencies.

“It’s like having a two-car garage and you’re trying to park six cars in it,” says Slawson.

In addition, ramp managers can use the app to view work orders, the number of container lifts completed and their facility’s lift rate.

“At a glance, they can determine a day’s lift pace and what they need to do to pick up a pace — that wasn’t very visible in the past, says Slawson. “You can get a better idea of what’s coming your way in 48 to 72 hours.”

“The idea is to give terminal operators more things at their fingertips,” she says.

APIs are an important arrow in UP’s automation quiver. The Class I has been using thousands of APIs internally and now is trying to make them available to the external commercial marketplace, says Gosch.

“We are now up to more than 40 APIs, and some customers use them daily. We will continue to add APIs in 2022,” she says.

For example, the railroad plans to provide APIs that enable customers to pay bills electronically — similar to the Starbucks app — and offer waybilling functions, says Gosch.

APIs also will tie into the Class I’s new intermodal relationship with Knight-Swift Transportation Holdings Inc., one of the top five U.S. domestic intermodal service providers. Knight-Swift ended its affiliation with BNSF Railway Co. on Jan. 1, 2022, to partner with UP in the west.

APIs tie well into UP’s overall technology strategy, Gosch believes. It’s all about further distancing the railroad from the complicated and cumbersome business processes of the past.

“The idea is to make manual or painful processes easier and seamless,” Gosch says.