Short lines have existed for more than 100 years, but the majority of them were formed over the past 40 years after the Staggers Rail Act of 1980 deregulated the U.S. rail industry. The legislation prompted Class Is to spin off a host of unprofitable lines to families or entrepreneurs, many in small communities. The new owners then created short lines to serve shippers along the acquired routes.

Currently, there are more than 600 regionals and short lines in the United States and Canada. And pretty much since their first day in operation, they have employed aggressive business development practices in an effort to serve more customers and carry more carloads.

Business development is crucial to small roads because they typically don’t have a marketing team dedicated to generating more traffic or vast resources to commit to a deal. The owners and general managers of short lines need to think more creatively and work collaboratively to mine success. By teaming with shippers, Class I officials and others, they can strike deals to build business without shouldering all the risk or monetary commitment.

Short lines bring a lot to the dealmaking table, such as a low cost structure, a locally owned and managed business, ties to Class Is and a customer-focused acumen, says Baker. They also can give a pending deal senior-level attention from the owner or top executive, who will work very closely with a shipper or potential new customer, he says.

Yet to swing a deal, short lines need to overcome some challenges, such as limited funds to build infrastructure, which can be expensive. In addition, working out a new freight move with one or more Class Is, and perhaps a second short line, can be complicated.

“A lot needs to come together. A short line is not in total control of the rate or service,” says Baker.” And short lines are always competing with trucks, which is difficult since trucks have 4 million miles of federally funded roads in their favor.”

Although business-development deals might take years to cultivate, require dozens of meetings with a shipper and perhaps lead to just a few more carloads per month, they are worth a short line’s effort to build customer relationships and register growth.

“Every new carload is something worth celebrating and chasing after,” says Baker. “This is it for short lines — they don’t own a line from Chicago to L.A. They have to hustle and scrap.”

To honor the industry’s best at hustling and scraping deals together, the ASLRRA each year bestows Business Development Awards. The association chose four 2020 winners from among a record number of nominations: the Ann Arbor Railroad, Delmarva Central Railroad, Indiana Rail Road Co., and Reading, Blue Mountain and Northern Railroad.

Although it was difficult to pick this year’s honorees, the ASLRRA is well aware there are a lot more praiseworthy business-development projects happening in the industry than just those cited in the more than 20 nominations, Baker says.

“There are hundreds of these I’d like to think,” he says.

Following are descriptions of the four 2020 Business Development Award winners’ projects and outcomes, and some insights as to why hundreds of short lines pursue similar deals each year. 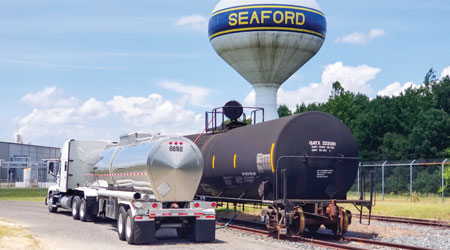 The Delmarva Peninsula separates the Chesapeake Bay and Atlantic Ocean, and is only accessible by a bridge or tunnel. The peninsula is generally considered the nation’s chicken capital because about 700 million chickens are grown there each year. The area has a mild climate that’s very suitable for growing crops needed for chicken feed.

Several years ago, officials at Carload Express Inc. — which owns the peninsula-serving Delmarva Central Railroad (DCR) — learned vital feed ingredient amino acids were delivered in the area by long-haul trucks. Large markets such as New York City, Philadelphia and Baltimore are within a day’s truck travel to the peninsula.

In 2019, Carload Express and DCR managers decided to approach amino acid suppliers Novus International Inc. and ADM, which were trucking their product but showed interest in using rail. The short line was able to

secure long-term agreements to ship rail cars of amino acids to the eastern shore of Delaware, Maryland and Virginia for transloading at a facility Carload Express acquired in Seaford, Delaware.

“We develop transloads as part of our growth strategy,” says Carload Express Chief Marketing Officer Cliff Grunstra. “It provides economies of scale for customers not on our line.”

The Seaford transload facility is a former BASF chemical manufacturing plant. There was no traffic tied to the facility when Carload Express acquired it in 2018, but the company had identified opportunities with potential customers, Grunstra says.

Novus was searching for a rail-served terminal when Carload Express reached out  — which was good timing — and the shipper shared the company’s transload vision, he says.

Now, amino acid produced by Novus in Texas is moved by Union Pacific Railroad and Norfolk Southern Railway to the DCR. Carload Express and DCR worked with municipalities to build a road at the Seaford facility adjacent to an existing siding to accommodate direct rail-to-truck transloads. The business now amounts to about 100 cars a year.

“That seems like a low number, but it’s steady business and involves a key feed ingredient — they would have to shut down production without it,” says Grunstra. “It also takes 800 trucks off the peninsula.”

For ADM, NS carries amino acid from the company’s Decatur, Illinois, plant to the DCR. Carload Express designed and installed a pump, pipe, tank and truck loadout system at the Seaford facility to accommodate ADM’s business.

INRD: Warehouse has worked out well

The warehouse enabled INRD to help create a much-needed and modern logistics hub in central Indiana, and partner with a company that previously was considered a competitor. From 2017 through 2019, rail volume at the warehouse more than doubled to 2,600 carloads.

Discussions about the warehouse between Venture and the railroad had been ongoing for a long time, says INRD President and Chief Executive Officer Pete Mills, adding that the talks predate when he joined the regional in July 2015. Since both companies were involved in transportation and located in Indianapolis, they were familiar with each other

INRD bought property adjacent to its line for the warehouse, which was unique since the logistics company typically would buy and own the land, says Mills. Venture eventually purchased the land from INRD and owns the warehouse. The companies worked together to pinpoint the market for the warehouse and determine what the facility should look like.

The precision scheduled railroading era — when many in the rail industry are focusing on turning equipment quickly to avoid demurrage payments — is making the facility more attractive because it has 15 car spots versus two to six spots at other rail-served warehouses, says Mills.

“We can provide service six days a week and turn equipment fast with no demurrage bills,” says Mills.

The dry warehouse first handled mostly rolled or cut stock paper, but commodities have broadened to include food and building products, engines and metals, some of which originates on the two major U.S. coasts.

Venture provided $20 million for the warehouse and INRD spent less than $1 million on track infrastructure. 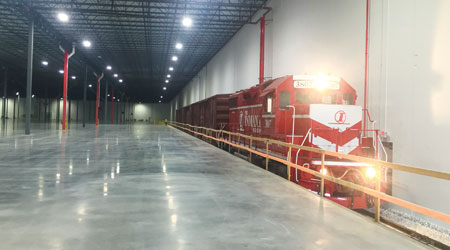 The regional teamed up with Venture Logistics Inc. to construct a 406,000 square-foot distribution center in Indianapolis.
Indiana Rail Road Co.

Venture took a big monetary risk without having lined up any business before the project started, but it’s paid off, says Mills.

“They don’t know a lot about rail and we didn’t know much about warehousing. But we knew we had a good business plan,” says Mills.

Now Venture — which had concentrated in the automotive space — sells both trucking and rail services. The Indianapolis facility is their only rail-served warehouse. For INRD, the facility expands its market reach and helps diversify its traffic base, says Mills.

“We love coal, but that business is in jeopardy,” he says.

The regional opened two new transload facilities in West Hazleton and Ransom, Pennsylvania, and launched a trucking company that serves all four of its transload facilities. The transload efforts added about 900 carloads to RBMN’s coffers in 2019, contributing to a record-breaking 34,000-plus carloads and year-over-year traffic growth of 6 percent. 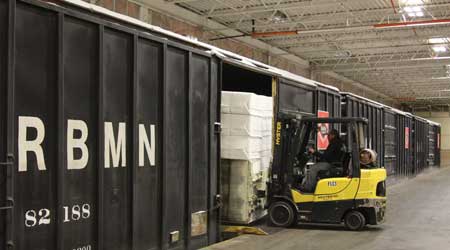 In late 2018, the regional converted a former Proctor and Gamble warehouse in Ransom, Pennsylvania, into a transload facility.
Reading, Blue Mountain and Northern Railroad

“We had been doing transloads in the area since 2016, but we had leased a facility, and this one in Ransom we own,” he says.

RBMN prefers not to lease facilities because “a lease is just throwing dollars out the window,” says Andy Muller, the railroad’s chairman and CEO.

“We’ve been at transloading for 30 years, and it can be a big part of business, but it’s hard to accomplish,” he says. “There is lots of competition.”

RBMN added a dock and track at the Ransom facility, where it now serves five customers. The terminal mostly handles bales of wood pulp, which is advantageous in this pandemic period because of high toilet paper demand, says Geschwindt. The regional expects the facility to generate about 900 carloads a year.

After discovering the railroad owned a piece of land in West Hazleton last year, RBMN quickly developed infrastructure and built a transload center on the site even though no customers were yet lined up. A pad and track were constructed in about one month’s time, says Geschwindt.

The facility opened in November 2019 and now serves one large customer that handles steel coils. The regional projects the facility can generate 440 carloads per year.

Also in November, RBMN launched Reading Railroad Transfer LLC, a trucking company that serves its transload facilities. The company enables RBMN to control all aspects of transload operations — such as rail, warehousing and trucking — and provide customers with timelier and more seamless services.

Several years ago, the Ann Arbor Railroad (AA) analyzed auto sales and production trends in the Toledo, Ohio, area. Owned by Watco Cos. LLC, the short line found there was a need for additional capacity in the finished vehicle distribution network, especially for sport utility vehicles and trucks.

That led to a partnership opportunity with Fiat Chrysler Automobiles (FCA) to create a new distribution center for finished autos in Toledo. The Silver Creek Vehicle Distribution and Homologation Center opened in time for the Jeep Gladiator’s launch in July 2019.

In 2018, AA hatched an idea to use its Temperance yard in Toledo as a dedicated finished vehicle distribution center. The yard had been used for various transloading and mechanical projects, but didn’t handle significant volume.

In 2005, 84 Lumber had built a 28,000-square-foot building at the yard’s rear to assemble prefabricated homes and trusses, but it closed during the 2008-09 recession. An AA team worked with 84 Lumber officials to obtain ownership of the building and land.

After custom work is completed, the vehicles are staged at AA’s Ottawa South Yard that has two loading tracks. The short line works with partners Auto Warehousing Corp. and Argus Corp.

Vehicles eventually are loaded into autoracks and moved by AA out of the yard for interchanges with CN, CSX or NS. 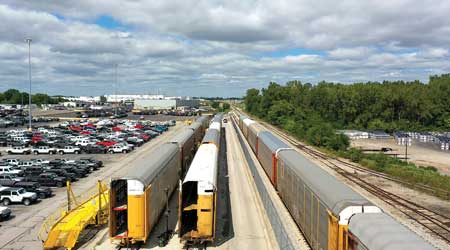 The distribution center played a key role in reducing FCA’s costs and maintaining its vehicles in Toledo, according to a Watco project summary. Had AA not created it and offered the homologation services, assembly work would have been moved out of Toledo.