Earlier this year, government and port representatives from seven states, as well as other freight-rail constituents, announced the formation of the Great Northern Corridor Coalition. The alliance aims to promote regional cooperation, planning and shared implementation to improve freight-rail movements from the Pacific Northwest to Midwest.

The partnership actually was formed in late 2012, after Port of Northern Montana Executive Director Larry Bonderud learned about the Multistate Corridor Operations and Management Program, a grant program offered by the U.S. Department of Transportation.

Bonderud long had thought transportation between West Coast and Great Lakes ports could be improved, and decided to seize the funding opportunity. He began contacting the ports and departments of transportation along the 3,500-mile Great Northern Corridor.

"Once [Bonderud] began talking to other stakeholders, he saw there was a common interest in looking at the entire corridor as a whole," says Patrick Boss, spokesperson for the Port of Quincy, Wash., a coalition member. Other coalition partners include ports in Everett, Grays Harbor, Longview, Pasco, Seattle, Tacoma and Vancouver, Wash.; the Port of Portland, Ore.; Washington Public Ports Association; and departments of transportation in Idaho, Minnesota, Montana, North Dakota, Washington and Wisconsin.

The coalition was successful in obtaining $1 million in grant funds. The Montana Department of Transportation, serving as the lead agency, is spending $500,000 in federal dollars and matching funds provided by coalition members to conduct a Strength, Weakness, Opportunities and Threats (SWOT) analysis. Scheduled to be completed this fall, the study will identify opportunities to improve operations and infrastructure along the corridor.

The SWOT analysis likely will identify congestion, clearance and infrastructure issues that either prohibit the movement of certain goods along portions of the corridor, such as wind towers and blades, or slow traffic, Bonderud says. Coalition members then will identify specific projects that can be completed using the remainder of the grant funds.

"The goal is to make this the fastest and most economical corridor over which to transport goods," says Bonderud.

Projects could include adding sidings, loop tracks, overpasses or underpasses, Boss adds. Strategically upgrading infrastructure throughout the corridor will be key as rail traffic continues to increase.

"If we have congestion here in Quincy, how does that affect trains operating through states like Montana and North Dakota?" Boss asks. "We have to anticipate economic growth. There will be more pressure to add products moving on the Great Northern Corridor."

The coalition's formation has had some ancillary benefits. By working together more closely, state and port partners can better serve shippers.

"Now, we'll have an idea of what the transportation alternatives are in this state or that state," Bonderud says. "We'll know which port is best to go through, what the rail linkages are, and how to do things that much quicker." 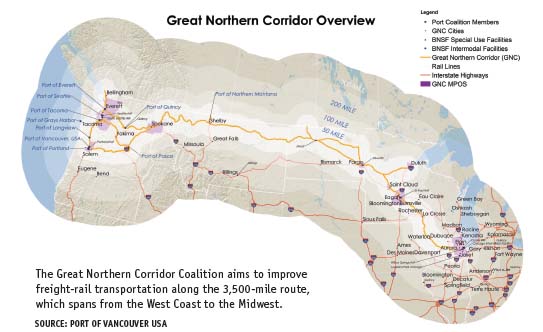