Domestic intermodal volumes should begin to pick up soon, Class I railroads say 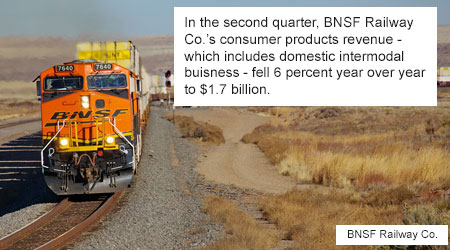 When Class I executives and industry observers are asked to gauge the domestic intermodal market’s near-term growth prospects, their responses include such words as “promising,” “bullish” and “optimistic.”

But those one-word descriptions don’t jive with recent volumes. Traffic data released by the Intermodal Association of North America (IANA) in early August showed little to no domestic growth in the second quarter.

More promising was international traffic growth, which clocked in at 6.8 percent as volume reached 2,270,328 units.

Despite the sluggish domestic performance, Class I execs and industry observers say there are reasons for optimism. A steadying economy, trucking industry woes, and railroads’ improving service performance, aggressive marketing strategies, and continued investments in infrastructure and resources suggest stronger volume growth might be in the offing.

There still is some uncertainty shrouding the domestic intermodal market, such as the degree to which truckers can take advantage of falling fuel prices. Yet, Class I execs anticipate steadier volumes throughout the remainder of the year — especially during the traditionally busy fall peak season — and into 2016.

Shippers continue to consider rail not only for the lower-cost, long-haul portion of their transportation moves, but for other areas of their supply chains that are suited to railroads and trucks working in concert, such as time-sensitive freight associated with a retailer’s promotional sale, the execs say.

For now, it’s difficult to get a handle on what’s driving or impeding domestic intermodal growth in some regions. IANA’s 2Q statistics paint a jumbled picture showing declines in some areas and significant growth in others — with no clear explanations as to why volumes were up or down, says IANA President and Chief Executive Officer Joni Casey.

Along the Intra-Southeast corridor, domestic intermodal volume jumped more than 20 percent in the second quarter, while container shipments in the Midwest-Northeast lane fell 1.9 percent.

Trucking gains from falling diesel prices and economic slips in some regions might have caused some of the weakening, Casey says.

Observations by Cass Information Systems Inc. confirm some of railroads’ fears about the trucking market. The Cass Intermodal Price Index — which measures market fluctuations in U.S. domestic intermodal costs — in July showed costs were 2.9 percent less than in July 2014.

The decrease reflects falling intermodal demand as lower fuel prices encouraged shippers to shift more freight to truckload, according to Cass, a freight audit and payment services firm that in 2014 managed more than $26 billion in freight spending.

“We have historically observed a high degree of correlation between truckload and intermodal pricing, and know that should truckload rates continue to accelerate in the coming months, intermodal rates would normally follow,” said Avondale Partners LLC analysts in Cass’ price index report. “That said, this is only true for the base rate, and the dramatic drop in fuel surcharges for truckers has to put pressure on domestic intermodal rates, especially in shorter lengths of haul.”

Nonetheless, better days likely lie ahead in the domestic sector.

“We are still bullish on domestic intermodal, including truck-to-rail conversions, despite some temporary softness,” says Casey. “The economy seems to show signs of picking up, and over-the-road capacity could be adversely impacted due to additional trucking regulations that are on the horizon for later this year, like electronic logging devices [ELDs] and speed limiters.”

Although many Class I intermodal execs acknowledge that falling crude prices have opened the door for volume shifts to trucks, most agree that a mounting collection of federal rules and regulations will likely thwart that development.

“Given the regulatory impacts and issues that will continue to challenge over-the-road driver availability, we expect and have planned for additional highway conversions, on top of our organic growth and geographic market expansions,” says Katie Farmer, BNSF Railway Co.’s group vice president of consumer products.

In 2Q, BNSF’s consumer products business — which includes domestic intermodal — posted a 3 percent gain in volume to 1.3 million units and a 6 percent decline in revenue to $1.7 billion.

But Farmer — who also chairs IANA’s board — and her Class I counterparts recognize the delicate balance between competition and partnership. The potential regulatory change sweeping the trucking industry might also provide more opportunities for railroads to strengthen their partnerships with truckers to benefit intermodal.

“We need to continue to collaborate with our trucking partners to find the right combination of truck and rail to meet our customers’ needs,” says Farmer.

“We’re focused on finding strong partners, so we need a J.B. Hunt or a Schneider, we need a bridge,” he says.

For CN — which in 2Q ratcheted up intermodal revenue 2 percent to $728 million (in Canadian dollars) despite a 4 percent volume slip to 1.2 million units — affiliating with strong partners is more vital than just landing lots of partners.

For a variety of reasons, railroads failed to execute last year and since have been in performance-improvement mode, says Hatch, who last year wrote a white paper for IANA on the progress of intermodal transportation.

“It was clear that it would take time and a whole lot of money to fix,” he says. “Shippers trust rail, but are they 100 percent sold? No. Execution is the biggest issue.”

And Class I execs are acutely aware of the performance issue.

"The majority of domestic U.S. intermodal business requires consistent and predictable service, and service improvement remains our main focus at this time,” says Doniele Carlson, a Kansas City Southern spokesperson. “We strongly believe that service consistency will be the key to growth.”

Neither KCS’ intermodal revenue nor volume grew in 2Q, falling 2 percent to 250,000 units and 1 percent to $97.9 million, respectively. 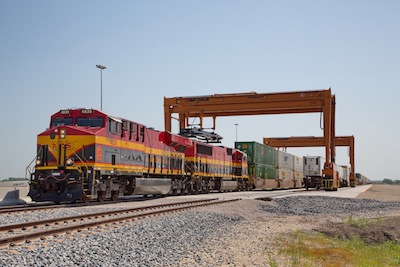 “The important thing is that we have to perform. Service levels continue to need to improve on our side,” he says.

“It’s faster turnaround times that create a lot of capacity,” he says.

Increased velocity coupled with decreased terminal dwell times, positioning the right equipment in the right places, etc. — how does it all contribute to improved intermodal service? Perhaps a better question is which one is the biggest contributor? Class Is’ extensive capital investments over the past few years might be the answer, industry observers say.

This year alone, the Class Is plan to spend more than $20 billion to build, maintain and grow their networks, says BNSF’s Farmer. Billions more were spent in previous years and billions more are budgeted in the years ahead, with a healthy chunk devoted to growing intermodal business, she says.

The list of Class Is’ recently completed and ongoing capital improvements is an extensive one, including:

• CN’s efforts to establish an intermodal yard at a facility the Alabama State Port Authority is building in Mobile — which is expected to broaden the Class I’s Gulf Coast presence by linking it to New Orleans — as well as construct its own $250 million intermodal terminal near Toronto, and expand existing ones in Chicago, Detroit and Memphis, Tenn.;

• UP’s purchase of about 6,000 new containers as part of its EMP partnership with NS and CSX Transportation that will own more than 70,000 boxes, work to expand several terminals — most notably in Portland, Ore., and Laredo, Texas — and completion last year of a $400 million facility in Santa Teresa, N.M.;

• NS’ recently opened terminals in Memphis, Charlotte, N.C., and Greencastle, Pa. — which added a significant amount of capacity — and planned expansions and upgrades to facilities in the Chicago area and in the Crescent Corridor near Atlanta;

• BNSF’s new expedited service to and from Seattle providing 60-hour/ six-day service, and double track/line capacity expansion projects that began this year to address remaining Southern Transcon line bottlenecks between Los Angeles and Chicago (the railroad has invested more than $3 billion over the past 10 years to double track nearly all of the route);

• CSX’s addition of about 200 new lanes since its Northwest Ohio terminal was built in 2011, opening of a new terminal in Valleyfield, Quebec, in May, and planned construction of a new facility with the Georgia Ports Authority in Chatsworth as part of the Appalachian Inland Port that aims to provide direct access to the Port of Savannah by 2018.

Marketing is a major arrow in railroads' intermodal quiver

At its annual Supply Chain Summit held June 25 in Grapevine, Texas, BNSF unveiled an “Investing for Today and Tomorrow” intermodal marketing campaign that touts the projects in this year’s record-setting $6 billion capital spending budget that can benefit intermodal customers. The Class I incorporates the campaign’s theme into materials and presentations targeting those customers.

At CSX — which registered an industry-leading 9 percent jump in domestic intermodal volume in 2Q — a Highway to Rail (H2R) program is making a difference with capturing business, says CSXT Intermodal AVP of Marketing Ryan Houfek.

Launched in 2013, the program aims to divert business from trucks. Through H2R, CSX sales and marketing personnel aim to understand a shipper’s unique supply-chain needs and then facilitate a more seamless intermodal integration. The Class I is counting on the program to help generate about 40,000 intermodal loads this year after it logged a similar amount last year.

“The H2R initiative is a foundation for the growth in domestic intermodal we’ve seen over the past few years, which is continuing to increase,” says Houfek.

Considering their efforts to bolster service performance, improve infrastructure and entice shippers through marketing ventures, Class Is are hopeful it all adds up to domestic volume growth in the near term, economic swings notwithstanding. The vibe from shippers about their freight-shipping prospects is relatively positive, Class I execs say.

“What we’re hearing from our customers is that things are going to be strong,” says NS’ Heller.

“We feel pretty good about where we’re at,” he says.