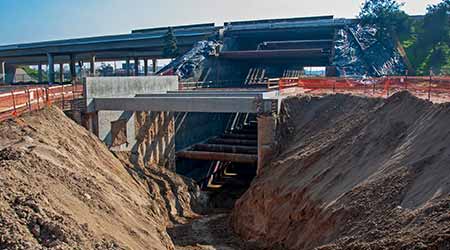 President Donald Trump has called on the state of California to give back $3.5 billion in federal dollars it received for its high-speed rail (HSR) project, which Gov. Gavin Newsom announced this week would be scaled back.

Calling the state's HSR program a "disaster," Trump tweeted late Wednesday that California must repay the money it received toward its initial plan to build an HSR system linking Los Angeles and San Francisco.

"California has been forced to cancel the massive bullet train project after having spent and wasted many billions of dollars," Trump tweeted. "They owe the Federal Government three and a half billion dollars. We want that money back now. Whole project is a 'green' disaster!"

In his State of the State address, Newsom announced Tuesday that the HSR program would be scaled back due to its escalating costs and delays. Building the L.A.-to-San Francisco line is now estimated at $77.3 billion and its completion isn't expected until the 2030s, according to the California High-Speed Rail Authority's (CHRSA) 2018 business plan. Instead of the longer line, the state should focus on a shorter route connecting Merced to Bakersfield in the Central Valley, Newsom said.

"Fake news," Newsom tweeted. "We're building high-speed rail, connecting the Central Valley and beyond. This is CA's money, allocated by Congress for this project. We're not giving it back. The train is leaving the station — better get on board."

"As long as [California] met all of the guidelines that were required, I'm certain they're not going to have to return the money," said LaHood, who served as transportation secretary during the Obama administration when California received the funds. "If the Trump administration wants to pursue it, it will probably have to go to court to do it."

After Newsom's State of the State speech, a number of rail industry advocates and associations issued statements in response to the governor's decision to curtail California's HSR ambitions.

"The investments made to date have created thousands of jobs and will produce dramatic improvements in mobility through clean, efficient public transportation," Skoutelas said in a prepared statement. "APTA is committed to working with governors and local leaders to support their efforts in advancing vital investment projects that require strong federal, state and local partnerships."

Newsom's decision recognized the reality that Californians, while enthusiastic about access to HSR service, "lost faith" in project managers to complete the project, said Jim Mathews, president of the Rail Passengers Association.

"By delivering on 200-mph-plus service along an initial operating (IOS), the authority can restore public trust," Mathews said in a press release.

However, the IOS must eventually connect to major metro areas in the state's north and south regions in order for it to have value, he added.

"We expect to hear from the Newsom administration and the [CHSRA] in the coming weeks about developing low-cost paths to connect the IOS to the San Joaquin corridor," said Mathews.

The Rail Passenger Association of California and Nevada (RailPAC) endorsed Newsom's decision to prioritize completion of the Merced-to-Bakersfield line with direct connections to Northern California's other rail services.

"This focus should advance the timeline for public operations and in doing so will bring improved rail service and transportation capacity to California travelers, especially those residing in the San Joaquin Valley," RailPAC officials said in a prepared statement.

However, the group expressed concern that the HSR system would not connect to any of the state's four largest cities.

"Such a route would have little prospect of covering its operating costs," RailPAC said. "We believe that the minimum system that would deliver significant transportation benefits would be San Francisco to Bakersfield."

Officials at Texas Central, which is developing a bullet-train system between Dallas and Houston, stressed that not all HSR projects are the same. Their project, for instance, is not using federal grants to build their privately financed rail line, they noted.

"We fully understand the complexities of the California high-speed rail project and the drivers that have led to the decision issued [Tuesday]," said Texas Central President and Chief Executive Officer Carlos Aguilar. "It is important to contrast both the physical facts that make our project different, as well as the government versus private approach to building such large-scale infrastructure."