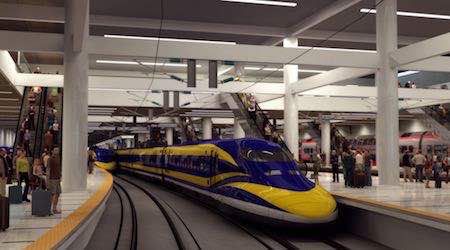 From July 2006 through June 2016, the California High-Speed Rail Authority (CHSRA) has invested $2.3 billion in planning and constructing the state's planned high-speed rail system, according to the agency's 2017 project report released earlier this week.

By law, CHSRA is required to submit progress reports to the California State Legislature every two years.

Since CHSRA's March 2015 report, the agency advanced construction on 119 miles of transportation infrastructure at nine sites between the Central Valley and Silicon Valley.

In addition, CHSRA has employed more than 900 construction workers in the Central Valley, with many more hires expected, the report stated.

However, the project faces myriad "regulatory, environmental, public policy, political, funding and other challenges that must be anticipated and effectively managed in order for the program to be successfully delivered," CHSRA officials said.

CHSRA also has reached agreements with railroads whose rights-of-way are near the high-speed line's planned alignment in the Central Valley. In particular, the agency and Union Pacific Railroad have executed an engineering, construction and maintenance agreement; an insurance and indemnification agreement; and an environmental liability agreement.