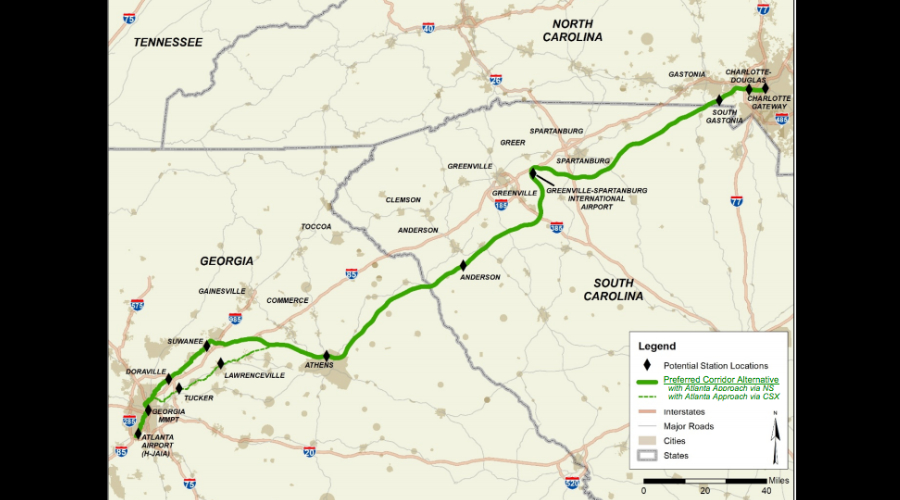 The Georgia Department of Transportation (GDOT) has released its Tier 1 environmental impact statement (EIS) and record of decision (ROD) for the proposed Atlanta-to-Charlotte high-speed rail service.

The Federal Railroad Administration (FRA) and GDOT worked together with stakeholders in North Carolina and South Carolina to reach the milestone in the Tier 1 EIS process.

In this Tier 1 FEIS/ROD, the FRA identified and selected the Greenfield Corridor alternative as the preferred corridor alternative based on analysis presented in the Tier 1 draft EIS, and input received from the public, stakeholders, agencies during the public meetings and the comment period, according to a GDOT press release.

The "high-speed line is a critical step toward meeting the needs of the growing Piedmont Atlantic Megaregion. It will be a huge boon to the region, improving connectivity, travel times, economic development and enhance energy efficiency," said High Speed Rail Alliance officials in a press release.

The Greenfield Corridor alternative is a 274-mile dedicated passenger-rail route that would connect Charlotte Gateway Station to the Atlanta International Airport. It includes two stations in South Carolina, three in North Carolina and five in Georgia.

The EIS looked at an option for running diesel trains up to 125 mph and electric high-speed trains up to 220 mph. The high-speed option would make the trip in about two hours, compared to the three hour and 45 minute car ride.

The plan is to run eight to 11 round trips per day, which would lead to a projected ridership of more than 6 million by 2050, diverting 29% of trips to rail, alliance officials said.