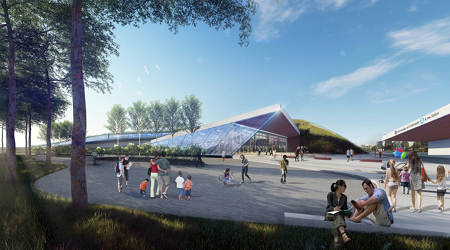 The Colorado Department of Transportation (CDOT), Virgin Hyperloop One and AECOM yesterday announced they're advancing the second half of a feasibility study for a proposed hyperloop line in the state.

In late 2017, CDOT and Virgin Hyperloop One joined forces with AECOM to initiate the study, which is examining the technological and economic feasibility of a hyperloop transportation system in Colorado.

The second phase of the study will provide opportunities for local governments, businesses and community groups to become part of the venture, according to a Virgin Hyperloop press release.

Hyperloop technology could whisk passengers and cargo at more than 200 mph inside low-pressure tubes, according to the company. Passengers would ride inside pods that lift above the hyperloop track using magnetic levitation.

The so-called Rocky Mountain Hyperloop would operate from Cheyenne, Wyoming, to Pueblo, Colorado, with an east-west spur between Denver and Vail, Colorado.

Virgin Hyperloop yesterday released an initial design concept for the first hyperloop station near the Denver International Airport. The new system would connect to existing transportation modes, including the Regional Transportation District of Denver's commuter-rail A Line.

The Rocky Mountain Hyperloop is one of the 10 proposals that Virgin is developing. The company also is performing feasibility studies for hyperloop systems in Florida, Texas and the United Kingdom.