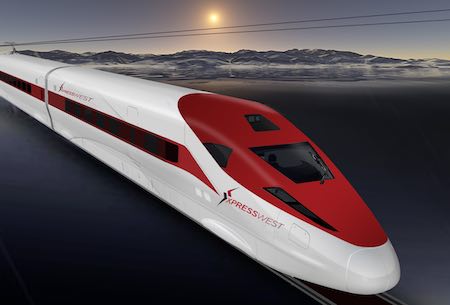 A rendering of an XpressWest high-speed train
Source: XpressWest website

This adjustment is necessary to facilitate construction of the preferred route for the rail project, according to a press release issued by Heller's office.

The National Parks Service doesn't have a clear process to allow for the development of infrastructure, while the Bureau of Land Management has a process that's more efficient, the release said.

"This simple land transfer between two federal agencies will allow the XpressWest project to pursue the most economically efficient route," Heck said. "This direct route through the Mohave Natural Preserve is preferred by all parties because it avoids unnecessary impacts on wildlife and habitat and eliminates the need to dig expensive tunnels and take a less direct route."

The XpressWest route would run along Interstate 15 between Victorville, Calif., and Las Vegas at speeds in excess of 150 mph, with trains leaving every 20 minutes during peak travel times, according to the project's website. The train technology and systems would be fully interoperable with California's planned high-speed rail system, allowing for future service into Los Angeles and Burbank, Calif.

"We need an 'all of the above' approach when it comes to addressing our transportation needs and enhancing tourism opportunities for Las Vegas," Heller said. "The XpressWest rail project will promote economic development and significantly boost tourism to Nevada, benefiting our state for years to come."

XpressWest and China Railway International USA Co. Ltd. announced in September 2015 that they have formed a joint venture to develop the high-speed route.