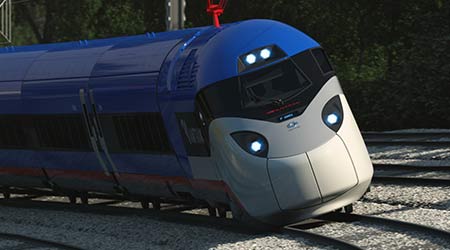 One of Amtrak’s biggest announcements this year was its $2.45 billion planned investment in the Acela Express service on the 457-mile Northeast corridor, which includes a contract with Alstom to acquire 28 next-generation high-speed trainsets.

Amtrak chose Alstom's Avelia Liberty model for the trainsets, which will replace the aging Acela fleet that serves the corridor between Washington, D.C., and Boston. The new trains will travel up to 160 mph, which is faster than current Acela trains but within the corridor’s speed limits. The trains will be able to travel up to 186 mph, which will enable the railroad to increase train speed after future Acela line upgrades are completed, Amtrak officials say.

The new trains will be manufactured at Alstom’s facilities in Hornell and Rochester, N.Y., while parts for the units will come from suppliers in more than 30 states, according to an Amtrak press release.

Under a technical support and spare supply agreement with Alstom, the trains will be maintained at Amtrak depots in Boston, New York City and Washington, D.C. Alstom will provide additional support from its sites in New York, Delaware and Illinois for 15 years, with an option for an additional 15 years.

The Liberty — the newest Avelia high-speed train — will be a good fit for the Acela service, according to Scott Sherin, Alstom vice president for marketing and strategy.

One of those characteristics is Alstom’s anticipative tilting technology known as Tiltronix, which enables the train to maneuver curves safely at higher speeds while maintaining passenger comfort.

"This technology allows the train, when it goes into a curve, to tilt much like you see a motorcycle tilt when it goes through a curve," says Sherin. "We have geopositioning on the train. It knows when it enters into a curve, and it will trigger preemptively this tilting motion so the passengers don’t feel the lateral acceleration."

Another key feature is the train's articulated architecture, which has trucks placed between cars to minimize bouncing felt by passengers. Also, the trainsets will be equipped with Alstom’s crash energy management system.

Safety will be further enhanced by concentrated power cars located at each end of the trainset, providing an extra buffer of protection.

As for passenger amenities, the trains will be more spacious than the current Acela fleet, with room for up to 33 percent more passengers. Additional amenities include Wi-Fi service, USB chargers next to seats and options for reserved seating. The Avelia Liberty also will be designed as a premium train, with two classes of service — first and business, says Sherin.

The new vehicles will be unique among the Avelia family of trains, but will feature the next generation of certain elements in existing Avelia trains, he says.

For example, the power car that contains the propulsion system for the Liberty train is based on Alstom TGV trains used in France. The passenger vehicles are based on another Avelia train, the AGV, which operates in Italy. The Tiltronix technology comes from yet another Avelia, the Pendolino.

The more spacious trains will accommodate Acela’s high ridership — many of its rush-hour trains are at capacity — and use 15 percent less energy, in part because they'll be significantly lighter than Acela's current stock. They’ll also be built with regenerative braking capabilities that will reduce operating costs and further increase Amtrak’s return on investment, says Sherin.

As for the production timeframe, the trains are in the design phase. Once that's completed, Alstom will develop two prototypes for Amtrak to approve before the company begins production. The first trains are slated for commercial service in 2021.

All the new trainsets are expected to be in service, and the current fleet retired, by the end of 2022, according to Amtrak.