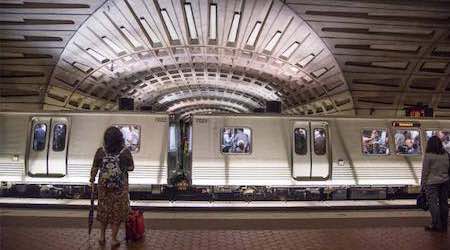 The new $1.82 billion proposal would reduce frequency in only peak travel periods, which means trains would operate every eight minutes across all lines, WMATA officials said in a press release. The agency currently runs peak-service trains every six minutes.

Under the agency's previous proposal, headway between off-peak trains could have increased to 15 minutes.

"[WMATA] listened very carefully to our customers who said they would prefer to pay a little more than lose key rail and bus services," said Wiedefeld. "I recognize that even with some relief for customers, this proposal is tough medicine for the region, jurisdictions, riders, and Metro employees, all of whom must contribute to balance this budget."

Under the new proposal, peak-service rail fares would rise 10 cents, while off-peak fares would jump 25 cents.

The agency revised the budget by funding some eligible rail-car components through the capital budget, which would reduce pressure on the operating budget, agency officials said.

In addition, WMATA is seeking increased support from Virginia, Maryland and Washington, D.C. — its three funding jurisdictions. Agency officials hope the jurisdictions will boost their funding contributions to $976 million in FY2018, compared with $845 million in FY2017.

The revised budget plan allocates $1.25 billion for capital investments as originally proposed. The capital budget calls for investing in 7000-series cars to replace older models, as well as rehabilitation and maintenance of the better-performing legacy fleet.

The plan also invests in station escalators, elevators and lighting.

WMATA's finance committee will consider the revised budget proposal on Thursday. The full board is expected to vote on the budget on March 23.