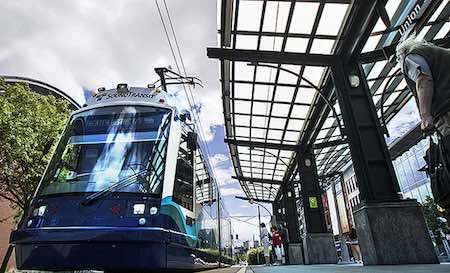 Keeping the line fare free until it reaches the Stadium and Hilltop neighborhoods in Tacoma, Wash., will ensure that the service remains an "attractive benefit" to both businesses and local residents, said Sound Transit Board Vice Chair Marilyn Strickland in a press release.

Since 2014, the Downtown Tacoma Business Improvement Area (BIA) has made annual contributions to keep the system free, according to the release.

The board in 1999 designated Tacoma Link a fare-free service based on an analysis that showed fare collection costs would exceed revenue, Sound Transit officials said. In 2013, after ridership had grown, the agency's board approved implementing a two-step fare structure for the line.

However, the estimated revenue that would have been generated from the fares has instead been paid directly by the BIA under an agreement with Sound Transit. Postponing the fare increase extends the agreement and keeps the line free, agency officials said.

Tacoma Link is the only free transit service in the Puget Sound region, they added.