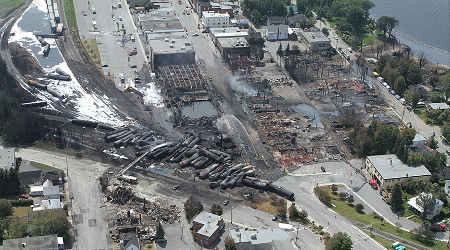 Charges were brought against the individuals, including senior officers of the railway, for violating obligations related to the application and testing of brakes under the federal law.

Specifically, the six pleaded guilt to the contravening rule 112(b) of the Canadian Rail Operating Rules by failing to ensure that a sufficient retarding force was present to prevent equipment from moving after applying handbrakes.

Five of the accused were fined CA$50,000 each, for a total of CA$250,000, which is the maximum fine allowed under the law. The sixth was sentenced to a conditional prison sentence of six months, the maximum.

The fines will be directed to the Fonds Avenir Lac-Mégantic fund to support the community, Transport Canada officials said in a press release.

Harding was sentenced to the sixth-month term, which will be served in the community, according to CBC News.

Last month, Harding, Labrie and Demaitre were each found not guilty of one count of criminal negligence in the 47 deaths.